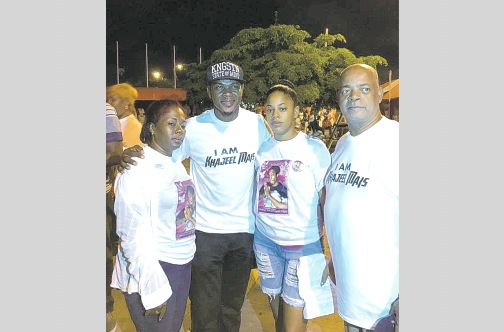 DANCEHALL singjay Mr Vegas was part of a prayer vigil held in Half-Way-Tree offering moral support to the family of the late Khajeel Mais on Tuesday.

Mais, 17, was shot and killed when the taxi he was travelling in collided with a BMW X6 motor vehicle on Highland Drive in Havendale in 2011. It is alleged that the driver of the BMW got out and fired shots at the taxi, hitting the boy.

The St Andrew businessman, Patrick Powell, 59, who was fingered in the murder of Khajeel Mais, was freed on Monday after the seven-member jury was directed by Justice Lloyd Hibbert to return a not-guilty verdict on murder and shooting with intent charges.

According to Mr Vegas, he and other Jamaicans are dissatisfied with the court’s ruling.

“A lot of people may think that this is none of our business and that it wasn’t our child that was killed, but we have to remember that we are Jamaicans first and foremost. We saw the outcome of the case and a lot of persons are really disappointed, and we have to let the justice system know that we do not like the way this case was handled,” he said.Mr Vegas further stated that he is hoping that Jamaica doesn’t see a similar incident.

The entertainer is one of several from the entertainment fraternity who have voiced their concerns about the death and murder trial of the teenager. Among them are Skatta Burrell, Maestro Don and producer Tiyarro Drake.

Vegas is known for tracks including Bruk It Down, Heads High, I Am Blessed, and Hot Wuk.