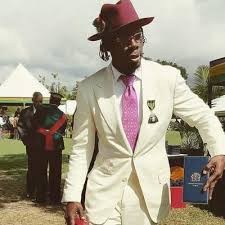 WILD cheers rang out across the expansive lawns of King’s House in St Andrew yesterday as deejay Shabba Ranks rose to accept his Order of Distinction from Governor General Sir Patrick Allen.

Shabba Ranks, whose given name is Rexton Ralston Fernando Gordon, was recognised for his invaluable contribution to the Jamaican music industry.

Dressed in an off-white suit, pewter-coloured shoes, topped with a Fedora Bordeaux, the two-time Grammy Award winner moved towards the platform and earned the loudest cheers from the hundreds gathered.

Before ascending the steps, the 50-year-old artiste paused, doffed his Fedora then handed it to the uniformed guard. With this, the cheers grew even louder.

It was a proud Shabba Ranks who spoke to the Jamaica Observer moments after the investiture.

“Triumphant. Dat a my feeling right now because, as my mother used to tell mi from I was little, that hard work does pay off. So wi can see dat di validation for hard work is jus’ greatness — good really begets good. For my island to look at me as one of those proteges and bestow the Order of Distinction pon me, when I first hear, it’s just delight, joy and ‘cause me to think about how, for so many years, mi a work with the strength of my forefathers who did their work and still could not achieve dis in their lifetime… So mi jus’ proud,” he stated.

The deejay, known for tracks such as Trailer Load, House Call, Ting-a-Ling and Mr Lover Man, said he continues to work, having recently completed a summer tour in Europe.

“Di music continues. Di music never stops. People in their mind feel like di music stop. Music can’t stop until di man who is doing di music is ungrateful to God Almighty, that’s when his creative process and development ends. So whoever waan hear Shabba, I never disappoint, I’m always here. Mi have some whole heap a music but some people feel like they don’t want to pay Shabba for my music… a some free issue dem want an’ for 30 years I’ve been doing that. So, if they don’t want to pay my yute dem will release it in case of anything.”

He said he is ready to perform on a local stage any time, once promoters are willing to pay.

Watching from the sidelines was Shabba’s mother, Constance Christie, whom he affectionately calls “Mama Christie”. For her, Shabba had nothing but the highest praise.