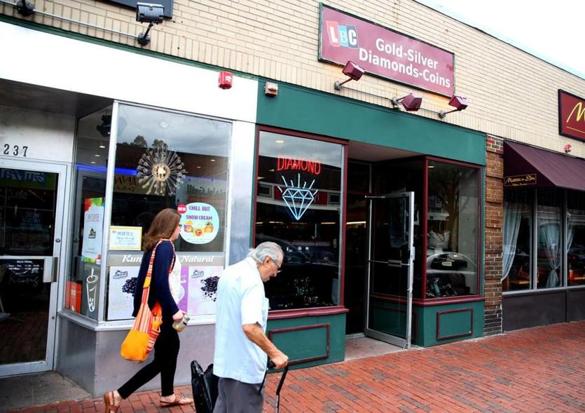 A family member of Peter Tosh reportedly pawned a Grammy awarded to the performer at a pawn shop in Davis Square.
By Malcolm Gay Globe Staff October 05, 2016

That’s the question being asked after a Davis Square pawnshop became an unlikely player in the protracted family drama of the late reggae superstar.

The Grammy was posthumously awarded to Tosh in 1988. The tale of its recent whereabouts begins at LBC Boutique and Loan in Somerville, where a Tosh family member reportedly pawned it last spring, along with one of the musician’s guitars, for a $6,000 loan.

Fast forward to months later, when the Grammy’s location became the subject of a bizarre tug-of-war between representatives of Tosh’s Boston-based family and pawnbroker Michael Bayles, who told the Globe that he sold the items to a collector from California for $38,000.

“One of those bigwigs from Google bought it,” said Bayles, who declined to name the buyer. 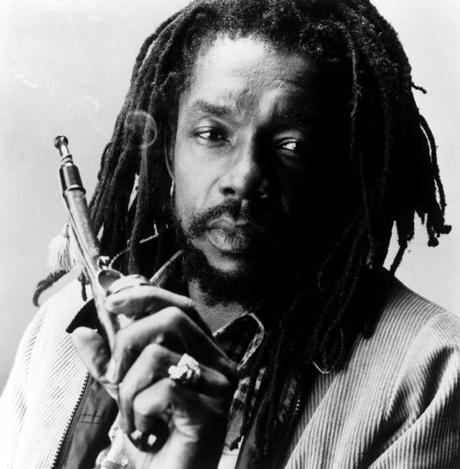 The only problem? Tosh’s daughter Niambe McIntosh, a Boston public schoolteacher who administers her late father’s estate, said otherwise: “It is in possession of the family,” said McIntosh, one of two Tosh children living in Boston, during a brief telephone interview in late August.

Both parties declined to provide corroborating evidence for the award and guitar’s whereabouts — deepening the mystery as the situation gained urgency, with a new Peter Tosh Museum set to open in Kingston, Jamaica, Oct. 19 planning to exhibit the musician’s only Grammy.

“You can come down to see the Grammy for yourself at the museum,” said McIntosh. “I don’t know what that guy is saying.”

Brian Latture, managing representative of the Tosh estate, backed up McIntosh’s account. “There was never a disconnect of its possession,” said Latture.
Peter Tosh.

Pawnbroker Bayles, who also goes by the name Dylan McDermitt, said he first publicized the Tosh trove in August by uploading videos to YouTube and selling pictures of the hocked Grammy Award and guitar to the gossip website TMZ.

“Just like pawn stars,” he said via text, referring to the History channel’s reality show about pawnbrokers. “Now our store is famous.”

Reached by phone at Disney World while on vacation, Bayles said that the Grammy first entered his shop last March, when he gave one of Tosh’s “immediate family members” $4,000 to pawn for the Grammy and $2,000 for the guitar, a Martin. He said that when the loan wasn’t paid back, he obtained legal ownership and that members of the Tosh family approached him about buying the paraphernalia back, but they couldn’t meet his price.

Born Winston Hubert McIntosh, Peter Tosh — along with Bob Marley and Bunny Wailer — was a founding member of the seminal reggae group the Wailers. An outspoken political activist, Tosh cowrote some of the group’s biggest hits before leaving in 1974 as Marley’s fame grew. He embarked on a solo career, winning a Grammy for his 1987 album “No Nuclear War.” Slain that same year by armed intruders during a home invasion, Tosh never lived to receive the Grammy.

He left no will, and in recent years Tosh’s relatives have squabbled in court over royalties from his estate.
The pawnshop said it had the Grammy awarded to Peter Tosh on display.

Reena Karasin for The Boston Globe 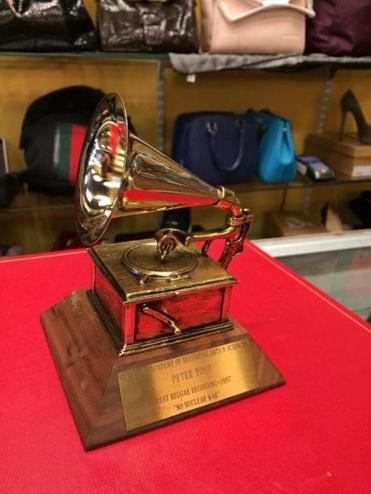 The pawnshop said it had the Grammy awarded to Peter Tosh on display.

Why might any member of the family pawn Tosh’s Grammy and guitar? The answer remains a mystery, but the travails of Tosh’s children are not confined to the estate. In 2013, Tosh’s son Jawara McIntosh was arrested in New Jersey on marijuana charges. A Boston resident who performs under the stage name Tosh1, he is currently out on $75,000 bail, according to Ron Bar-Nadav, his attorney. At one point, the family apparently created an Indiegogo site to raise money for his defense. Jawara McIntosh could not be reached for comment.

Niambe McIntosh declined to comment on the family’s legal issues, saying only that it is “100 percent unified.”

“My focus and energy is on the museum,” she said. “We’re trying not to give any attention to anything that we’re not focusing on right now.”

The new museum will feature a range of memorabilia from Tosh’s life and career. Featuring roughly 1,000 square feet of exhibition space, it is a joint project of Pulse Investments Ltd., the Tosh estate, and Andrea Marlene Brown, the musician’s companion at the time of his death.

Kingsley Cooper, chairman of Pulse Investments, said the museum was aware of the confusion over Tosh’s Grammy.
A guitar that the pawnshop said was once owned by Peter Tosh.

Reena Karasin for The Boston Globe

A guitar that the pawnshop said was once owned by Peter Tosh.

“I’ve spoken with the family, and I’ve been assured that they have it,” said Cooper when reached by phone in Jamaica.”

The pawnbroker repeatedly offered to provide a copy of his receipt for selling the items, but ultimately refused to produce the evidence, saying it would be “corny.”

“Our business is exploding because of the worldwide recognition,” Bayles said. “People understand that we got money to spend, and we’re big ballers in the neighborhood.” 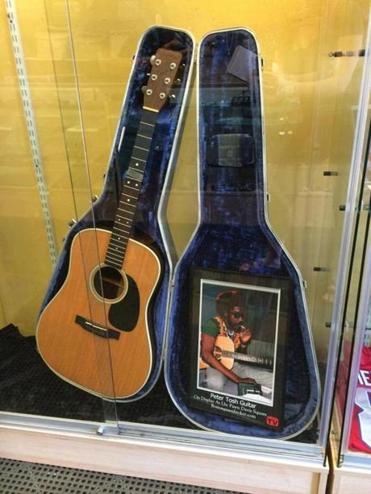 So who was telling the truth?

A glimpse of clarity arrived by way of Somerville police Detective Ernest Nadile, who oversees the city’s pawnshops.

Jawara McIntosh originally pawned the items, Nadile told the Globe, adding that Bayles subsequently told him whom he’d sold the Tosh trove to.

“He told me he sold it back to the family,” said Nadile, who added that he had no way of confirming the sale.

Confronted with the detective’s account, the pawnbroker would not back down: “The facts are the facts,” Bayles said. “I definitely sold it to a California gentleman. I don’t recall saying that, honestly.”

That was before a self-described employee of the pawnshop called the Globe to say that the shop had, after all, sold the items back to the Tosh family. Pressed for details, the person abruptly hung up.

Bayles did not respond to subsequent interview requests.
Jawara McIntosh, Peter Tosh’s son who is a Boston resident and who also goes by the stage name of Tosh 1, spoke with Miguel de Braganza and photographer Peter Simon during an exhibit by Simon at Yes.Oui.Si. in Boston. 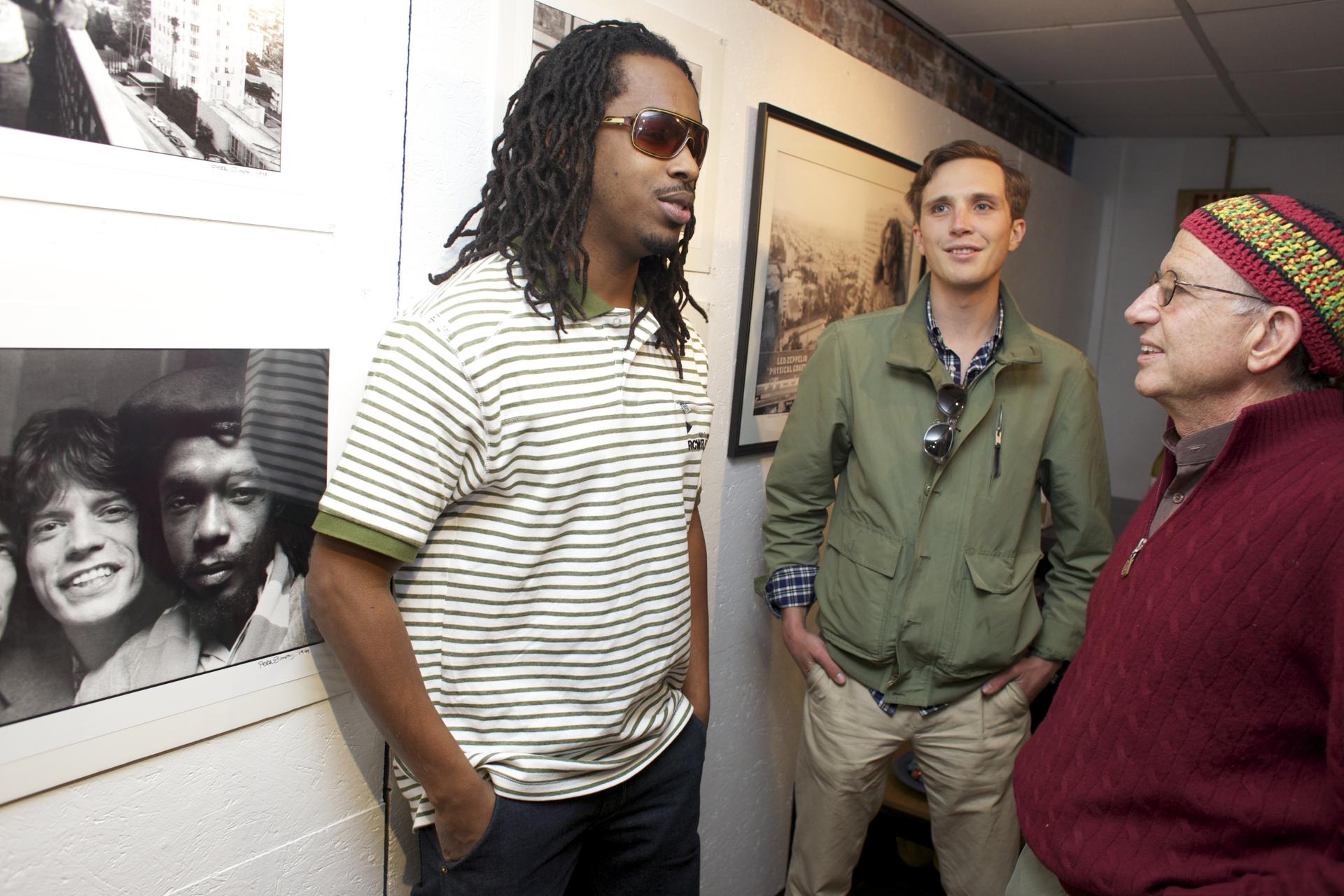 Brian Feulner for the Boston Globe

Jawara McIntosh, Peter Tosh’s son who is a Boston resident and who also goes by the stage name of Tosh 1, spoke with Miguel de Braganza and photographer Peter Simon during an exhibit by Simon at Yes.Oui.Si. in Boston.