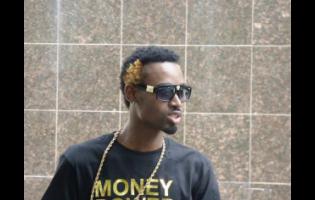 Dancehall artiste Boom Steppa has called on entertainers to quit glorifying criminals in their music. The deejay said music is not the cause of crime, but criminals deserve no respect from the public since they only terrorise Jamaicans and destroy the image of the country.

In a video posted on Facebook, he stressed that there are positive topics that have been sidelined by artistes. However, there always seems to be room to accommodate gunmen.

“Yu done know artistes sing some gun songs and thing for dub plates and you can make a quick money and I don’t have a problem with that. But I have a problem with artiste who are bigging up gunman and volatile communities to make some man feel like dem a do something good. Unno need fi stop glorify di gunman dem … don’t mek dem feel like a something good dem a do. Mi tired fi hear unno a big up some wanted men and a call up dem name inna song like dem a hero. They are destroying the country, and you (artistes) are helping if unno a mek dem feel like heroes,” he said.

He said college students and hardworking Jamaicans are more deserving of big ups.

“Stop big up dem … dem a nuh nothing inna wi country. Big up the people who are hustling for their honest bread and are selling their bag juice. How unno nah big up the truck driver and the taxi drivers? Unno nah big up no progressive people, but everyday unno a big up bad man and mek dem feel like dem a somebody and they have no love for us. Same like how they kill somebody else they will kill you and all of us are dying because Jamaica is very small so everybody is connected in some way. So when they are walking and killing people, just know that it’s not far from our doorstep,” Boom Steppa said.

He also pointed out that it is ironic that recording artistes would celebrate the very people who hinder their own development. The deejay also predicted that tourists will avoid making Montego Bay their destination.

“It’s like an American artiste bigging up a terrorist who just bombed an American building. These people are some inside terrorist and people are dying like rice grain … lose dem as fans man, dem nah buy yu music. The most they will do is bring gun around you and beg you some money and tax yu,” he said.

He says his comments are not intended to bash dancehall. “If I do something wicked and I hear my name getting bigged up on the radio, I will feel like I am doing something good so that is what I want to stop. But I want to be clear that I love dancehall and I don’t blame it from crime,” he told THE STAR.

Kalado believes some artistes are seeking validation from gangsters.

“Some do it to get bad man respect because they want to say dem lock this place and lock that place. Don’t know if we will ever see peace in Jamaica because social media is further turning men and women into fools for hype. See scammers tek the money, burn it, and dash it weh inna dance. Then they turn round and kill dem friend for money … things just mad yah now, yu nuh,” he said.

Boom Steppa is promoting his single, One Life.