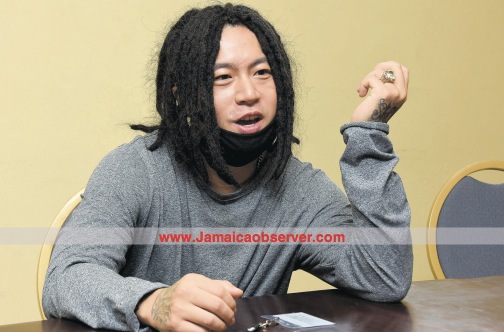 For over 10 years, Jung Jin Cho has been a staple of the small South Korean dancehall scene. Known as Skull, he is currently in Jamaica promoting his song Love Inside.

A collaboration with Stephen Marley, Skull said the track has enjoyed steady rotation in his country. He is expecting even better results in Jamaica.

“We are trying to promote it as best as we know how. It is a beautiful love song, but it also delivers hope and ‘positiveness’. It’s one of those songs that leaves you feeling good,” he said in a thick accent.

Love Inside is co-produced by Skull and Yoo Gun Hyung. The latter produced the 2011 international hit single Gangnam Style.

Skull said it took much perseverance to convince multiple Grammy winner Marley to record with him.

“I knew his brother Rohan Marley, so whenever he comes to Korea I am always asking him to ask Stephen to collaborate with me. My nagging paid off after two years though,” he joked.

Jung Jin Cho first heard dancehall music in 2000 and was immediately drawn to it. “I was passing a record shop and I heard it. At the time I didn’t know what genre was playing, but I instantly liked the sound. I didn’t have access to the Internet then, so I travelled to Japan with what little cash I had and purchased a few dancehall LPs and albums. I had no mentor in my country so I taught myself the music,” he said.

In 2003 he released Best Seller, his debut album, but sales failed to live up to its lofty title.

“It failed miserably and a lot of persons were asking why I choose dancehall as I am an Asian boy,” Skull recalled.

Undeterred, he released his second album called Raggamuffin in 2005.

Skull, who hails from Seoul, first visited Jamaica in 2006 and met with producers to increase his knowledge about dancehall culture. A subsequent visit resulted in Get Rich, a collaboration with Sizzla Kalonji.

“I am willing to work with anyone right now. Music brings universal unity and I am all about that,” he said.