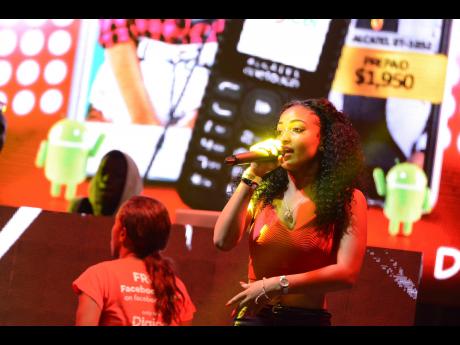 The self-titled first lady of Romeich Entertainment, Shenseea, describes herself as a multi-genre recording artiste and has already released her debut single Jiggle, which has been receiving rave reviews.

Since its release on Shenseea’s official Vevo page in late September, the RD Studios video has received over 10,000 views on youtube.com.

Speaking with The Gleaner, founder of Romeich Entertainment, Romeich Major, expressed that he decided to sign the artiste since she has the full package. He also believes their collaboration is sure to bear fruits of success.

“Shenseea is bringing the full package to the entertainment industry, so with her talent and work ethic and my promotional prowess, we are definitely a winning team,” he said.

“We at Romeich Entertainment strive for the best at all times. We always provide quality work, so we work with the best to produce the best result, and we are expecting great things from Shenseea,” he said.

As for Shenseea, she told The Gleaner that getting a record deal from Romeich Entertainment is a big deal.

“This union has been more than I could ever have hoped for and I’m just putting in as much work as possible and taking things one day at a time. I fit in everywhere and can perform for anyone… there are no rules in music. I write what I want, don’t stick to one topic … I’m unpredictable, so be on the lookout for Shenseea,” she said.