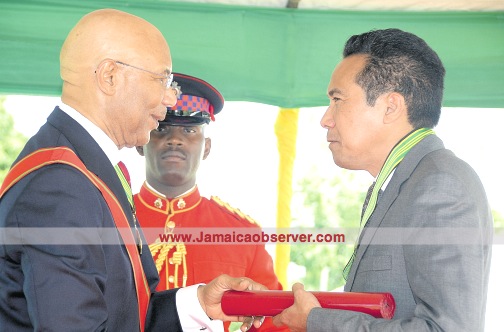 VP Records President Chris Chin says being awarded the Order of Distinction by the Jamaican Government is recognition for his family’s role in developing the country’s music industry.

Chin received the OD (Commander Class) in October during the National Honours and Awards ceremony at King’s House, St Andrew.

“I’m truly happy for the honour bestowed upon me and the recognition by the government to acknowledge the contribution VP has made for the betterment of reggae and the spreading of Jamaican culture as a whole,” he told the OBSERVER ONLINE.

Chin added that, “this award is not just for me. It’s for my family, my friends and associates, who’ve been just as much a part of this continuing journey, making VP the incredible company that it is today.”

A graduate of Kingston College, Chin has been president of VP since the mid-1990s. During that period, the independent label made the transition from ‘mom and pop’ company to major industry player.

Under his stewardship, VP has helped acts like Beenie Man, Sean Paul, Mr Vegas, and Gyptian hit the American mainstream.

This year, Chin noted, was a strong one for VP in several areas.

“We’ve made some new signings we’re excited about including Jah9 and Raging Fyah. Creatively, I was proud and happy with our Dennis Brown tribute album,” he said. “We have done some beautiful re-issues on Junjo Lawes, Linval Thompson and Augustus Pablo from the famous Greensleeves Records catalogue. The Alborosie album Freedom & Fyah has performed very well. Also, we began a global distribution deal with ADA (part of Warner Music Group) that has started out very well.”

Despite the achievements, he points to lingering challenges.

“The transitions to the digital music market continue, but there have been encouraging signs that the market will soon steady. We are optimistic about the future for our business.”

Next year, VP Records has a hectic schedule with new albums from Christopher Martin, Queen Ifrica, Romain Virgo, and Spiritual.

The company will also mark the 40th anniversary of Greensleeves Records with a number of reissue releases. VP bought that British label in 2008.