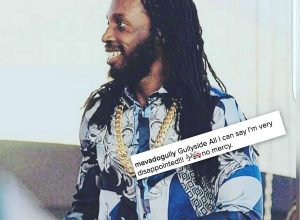 Mavado is reacting to Vybz Kartel latest diss track “Last One” saying that he is very disappointed in the World Boss.

Kartel unleashed the new dark diss track, produced by TJ Records, on Saturday night. While he is getting rave reviews from the core of his supporters, some other segments of dancehall aren’t too impressed by the track. Mavado seems to be echoing that sentiment on his Instagram.

“Gullyside all I can say I’m very disappointed!!! no mercy,” the Gullyside singjay wrote.

A rep for the “Brawla” deejay told us that the entire Gully camp was laughing at Kartel’s new single when compared to what Mavado put out and have in his arsenal.

“This is weak, very weak when compared to what we put out [Brawla] and also what we haven’t release yet,” Vado’s rep told us. “Right now even the fans started to take notice, Mavado is in a whole new league just look out.”

Unfortunately, we can’t have part 2 of the infamous Sting 2008 clash. Many would argue that Mavado won that clash but Vybz Kartel fans thinks that he won the clash. Perhaps we can all agree that it was a draw.