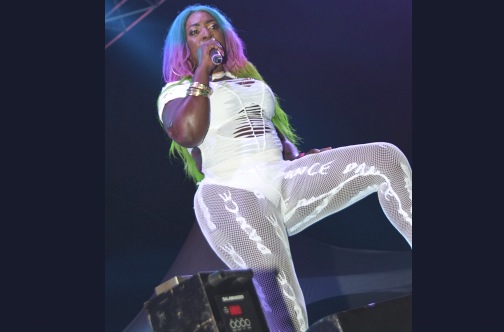 Culture Minister Olivia “Babsy”Grange has defended the decision to include deejay Spice on last weekend’s concert honouring Jamaican athletes who participated at the Olympics in Rio de Janeiro, Brazil.

Grange and her team have been criticised following Spice’s performance, which many deemed inappropriate given the scale of the event and audience, which included Governor General Sir Patrick Allen and Lady Allen, and Prime Minister Andrew Holness and Mrs Holness.

“I don’t think Spice being on the show created a problem,” said Grange. “Dancehall is very much a part of the genre of Jamaican music that is popular. The young people of today relate to dancehall and dancehall artistes have appeared on all types of national events, but never has this happened before. It may have had to do with technical problems. It also however highlights the prejudices in the Jamaican society. Plus, Spice overreacted and this thing got blown up,” she explained.

Grange is adamant she and her team made the right decision to include Spice on the roster.

“I have managed dancehall artistes and know that a dancehall artiste can go on the stage with the most popular rhythms that they have performed with, make up some lyrics and mash down the place… I know that,” said Grange. “She could have done that. But it has to do with having management and direction so you can feel an audience, you can make up some lyrics, you can create a vibe — because that’s what dancehall is all about.”Grange, through her company Specs Shang, managed artistes such as Shabba Ranks and Mad Cobra, who helped to take dancehall music to an international platform during the 1990s. She said Spice’s blunder at the National Indoor Sports Centre will not rule her out of performing on future events organised by her ministry.

“No. It’s just an experience for her. I think it’s a learning experience and she will grow.”

The deejay, whose given name is Grace Hamilton, followed a stirring performance by gospel act Kevin Downswell. Her set included A So Mi Like It and the new single Indicator. When the artiste was about to perform the latter, her backing track could not be heard and the artiste was left to perform the song a capella. Midway through Indicator she ended her set and left the stage.