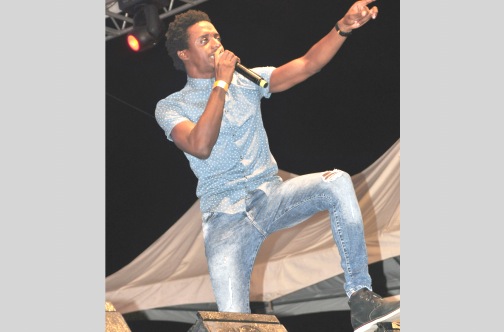 REPORTS out of the African state of Zimbabwe indicate Jamaican singer Romain Virgo was in fine form during his maiden performance on the weekend.

Virgo— who was with his band, The Unit — performed at Black Opal Face of Zimbabwe beauty pageant held at the Glamis Arena in Harare, on Saturday night.

The concert failed to attract a mega crowd, but Virgo’s performance was, nonetheless, a thriller, as he belted out hits including

Love Sick, Stay With Me, Stars Across The Sky, Love Doctor, Freedom and Soul Provider. He is also said to have shared the stage with Zimbabwean dancehall acts Soul Jah Love and Jah Prayzah.Prior to the show, organiser of the event Partson Chimbodza of Chipaz Promotions had indicated that a full slate of activities would be in store for Virgo ahead of the performance.

“As what has become our tradition with these visiting Jamaican musicians, we are organising a tour of some ghetto suburbs, with the musician (Romain Virgo) for him to meet some of the youths he inspires and if time permits, he might do some collaborations with a local artiste,” Chimbodza said.

After Zimbabwe, Virgo heads for Kenya for a concert at the Kenyatta International Convention Centre Comesa Grounds in Nairobi, on September 24.

For Virgo, being in Africa fills him with excitement and he regards it as a blessing.

“In reality this is my home, it’s where I’m from. So, it is a blessing. I have always dreamed to go back to the Motherland to see what it feels like to be there and touch the people… to see what home feels like. It’s a feeling I can’t explain,” he remarked on social media ahead of his trip.