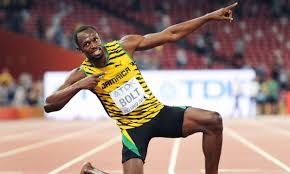 The entertainment scene in Ocho Rios just got faster – a whole lot faster.

After a soft opening in time to match the action at the Rio Olympics, the first Usain Bolt’s Tracks & Records (UBT&R) franchise was officially opened last Wednesday night in Pineapple, Ocho Rios.

The usually adequate space at the recently built location (an extension of the Pineapple Place plaza) seemed woefully inadequate as invited guests turned out in their numbers.

Co-franchisees Marsha Jahmnani and Joshua Jahmnani expressed a warm welcome to the audience, ensuring everyone was comfortable and that they enjoyed the warm hospitality that UBT&R had to offer.

The event seemed like more than just the opening of a sports bar, but more of a celebration of the man that many consider larger than life.

After his record-breaking heroics at the 2016 Olympics, it was easy to see why several persons who were not on the guest list, stood for several hours outside the venue to get a glimpse of the man.

His parents were there. Not surprisingly, so too were guests from Kingston, including Shaggy and Chris Dehring, president/CEO of Digital Interactive Services/Ready TV and wife Katia, Jamaica-born Canadian Olympian Christine Roper. From Montego Bay, there was Lachu Ramchandani and others. St Ann, definitely, was also well represented on the occasion.

Tourism Minister Edmund Bartlett, congratulated the co-franchisees, hailing their foresight and business sense, which he said made them compete for and win the first UBT&R franchise in the world.

Bartlett said the occasion was very important for Jamaica, especially as it relates to tourism “because we have been seeking to find new ways … to bring new experiences to visitors to the country.”

Bartlett added: “We want to earn more tourism dollars, and so we established five networks, one of which is entertainment and sports, and another of the five is gastronomy (food), and so tonight represents the fusion of food, music and sport. What a combination!”

Minister of Culture, Gender, Entertainment and Sport Olivia Grange hailed the occasion as very special, congratulating Bolt and described him as “an awesome person.”

The minister said Government was committed to working with all those who want to see Jamaica prosper and is always willing to enter to a public- and private-sector partnerships in this regard.

Meanwhile, Marsha Jahmnani has described working with the KLE Group in establishing the franchise as an incredible process.

“Each week, we see thousands of tourists coming into the ports who have a strong desire to experience Jamaica. They all know about Usain Bolt, they are interested in our music and food and overall culture, so having a Usain Bolt’s Tracks & Records here in Ocho Rios will cater to all these interests,” Jahmnani said.

She added that UBT&R Ocho Rios will be home to great weekly events and special activities geared towards visitors.

Gary Matalon, KLE Group CEO, said coming out of the record performance of Jamaica at the Rio Olympics and given that the Tracks & Records brands has Bolt as a major part of the team, KLE has had overwhelming interest from persons in a UBT&R franchise