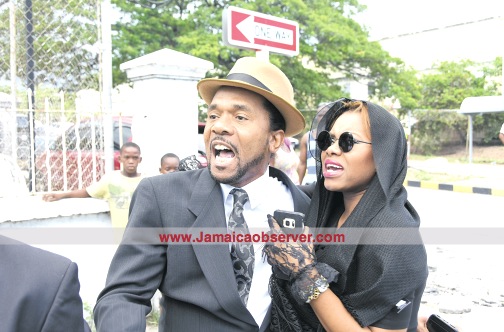 In sharp contrast to the accepted principle of Islam being a religion that preaches peace, the sons of late ska pioneer Prince Buster marred his funeral yesterday when they engaged in a verbal brawl that almost became physical outside the Islamic Council of Jamaica on Camp Road in St Andrew.

At the centre of the fracas, which saw the siblings hurling insults at each other, was the final resting place of their late father.

The ska legend had apparently asked to be buried at May Pen Cemetery in his West Kingston community.

During the verbal clash, the entertainer’s son, Saladin Ali, was heard saying that his father made the request when he was extremely ill and was not thinking straight.

However, his younger brother, Kareem Ali, later told theJamaica Observer at May Pen Cemetery that he was simply respecting his father’s wishes.

“It was my father’s wish to be buried here and we had to honour it,” he explained. “We granted his wish and purchased two plots for him and my mother. Others wanted him to be buried at Dovecot or National Heroes Park, but he came here in 2014 in a wheelchair and requested that his remains be buried in West Kingston. How could we not respect his wishes?”

All signs of the dispute had disappeared by the time the funeral procession got to May Pen Cemetery, with well-wishers giving some of their fondest memories of the entertainer. As shovels of earth concealed the pine coffin, the small gathering, which included Minister of Culture, Gender, Entertainment and Sport Olivia ‘Babsy’ Grange and musician Bongo Herman, gave their renditions of some of Prince Buster’s most popular hits.

Minister Grange later hailed the late ‘Godfather of Ska’ as not only an extraordinary musicain, but one who was very true to his roots.

“Prince Buster has been laid to rest and has gone to rest with the angels. He stuck with his faith and his family, which included all of West Kingston. He was true to his roots, and where we are standing now is one of the most historic sites in the English-speaking Caribbean,” she said.

The minister also stated that plans are underway to renovate and develop the cemetery into a memorial garden.

“We are very passionate about the development, as we will never turn our backs on West Kingston and the people. We are all good enough to be buried here. Some prominent Jamaicans are buried here,” she said.

Entertainers Lloyd Brevett and Don Drummond of The Skatalites fame, as well as West Indies and Jamaica cricketer Collie Smith are among the famous Jamaicans interred in the cemetery, which is located between Horizon Adult Remand Centre on Spanish Town Road and Tivoli Gardens High School on Industrial Terrace.

Born Cecil Bustamante Campbell in West Kingston, Prince Buster got his start with Clement ‘Sir Coxone’ Dodd’s fledgling Studio One sound system before branching out to start his own sound system, Voice of the People.

He produced the Ffolkes Brothers’ famous 1959 hit Oh Carolina that featured the Nyahbinghi beats of Count Ossie and the Mystic Revelation of Rastafari.

Oh Carolina is said to be the biggest seller in the Voice of the People catalogue.

The Buster catalogue is one of the most formidable in Jamaican popular music. His hits include Hard Man Fi Dead,

Prince Buster, who was 78 when he died at Memorial Regional Hospital in Florida on September 8, is survived by his wife Mona, 19 children, and numerous grandchildren.

A special tribute to the legendary ska icon was held at the Institute of Jamaica Auditorium in downtown Kingston following the burial.