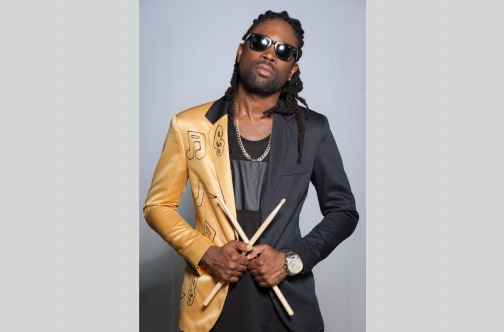 Touring with Beres Hammond and an hectic session schedule took up much of Kirk Bennett’s time this summer. Now that he has some breathing space, the drummer steps up promotion for his second album, Rumble In The Jungle.

Last week, he released the video to Rub A Dub Again, directed by Damian Daley.

That song is from the album, which was released digitally in June by VP Records. It features Tarrus Riley.

While he is acknowledged as the top session drummer in Jamaica, Bennett is not known to the average fan. Prominence in a music video can change that.

A lot of people watch videos to see the artiste, but I’m not fussy. It’s good music getting good reviews and I’m happy for that,” he said.

The title song (done with guitarist Mitchum Chin) was the self-produced album’s first release. There are collaborations with Cocoa Tea on Good Things, Who’s That Sound (with Hammond), and Jah Jah Knows featuring Jah Cure.

Born in Trelawny, Bennett has been the go-to drummer in Jamaica for over a decade, playing on some of the biggest hit songs during the period.

He has maintained that momentum in recent times. Nesbeth’s anthem My Dream and Missing You by Busy Signal are among the latest chart-riders showcasing his patterns.

Bennett has also had success as a producer with his Kirkledove Records. The label’s hits include Tek Wey Yuhself by Mr Vegas and Elephant Man’s Yuh Too Bad Mind.

His first album, Streetwise Dubwise, was released in 2009.