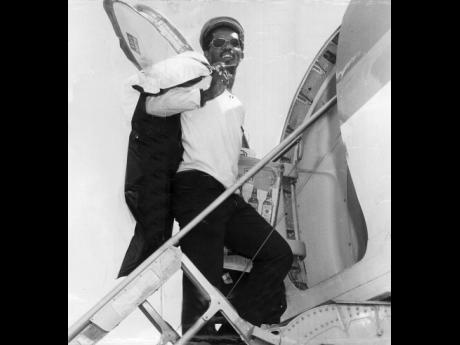 When rogue police fired shots into his building located at Orange Street in Kingston, Prince Buster decided it was time to leave Jamaica.

The musical icon, who helped to make that section of Kingston into the beat capital of the region, headed north for the United States.

This was the 1990s. Prince Buster would return intermittently, as he always saw Jamaica as his home.

Born in Kingston, Jamaica, on May 24, 1938, Buster was given the name Cecil Campbell. Buster converted to Islam after meeting Muhammad Ali, who he took with him to Orange Street, and later changed his name to Muhammed Yusef Ali. He died in the US on Thursday, age 78.

Swelly Dread, a furniture maker who occupies a section of Buster’s Orange Street property, recalls Prince Buster as a legend who used music to advance the cause of his people.

Prince Buster got ill a few years ago. He was slowed by a stroke, which meant he had to use a wheelchair.

“We marvel when wi see him stay suh. Is a strong, fit man all the time. Him always round him boxing gym and always physically fit,” Swelly Dread said.

He described Prince Buster as the King of Orange Street, and said the Government should consider renaming the road in honour of Prince Buster.

Trevor ‘Leggo’ Douglas, a music producer and a key player in the moves to redevelop downtown Kingston, however, said that work is afoot to have the section of Orange Street which is synonymous with music renamed Beat Street.

Leggo said Prince Buster, whose sound system was called Voice of the People, was one of the “most under-rated legends” who made a significant contribution to Jamaica’s music.

He recalled that on the last visit to Jamaica, one of Prince Buster’s close friends, Roy Fender, dressed up so much that the musical icon had to laugh.

Fender was Prince Buster’s DJ, responsible for spinning records whenever his sound system was being played. He was not a man known for wearing shoes even when he was well dressed.

But on the occasion when Prince Buster last visited, Fender could not help himself, and he put on a pair of shoes and dressed up to see his long-time friend.

Fender died recently after being hit by a vehicle in Kingston. It is unclear if Prince Buster was aware of his passing.

What is clear, however, is that those who knew the ‘Judge Dread’ singer want his remains to be brought back to Jamaica and buried at either May Pen Cemetery or the National Heroes Park.