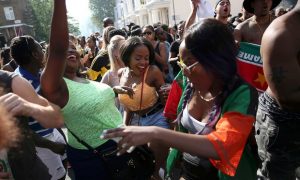 Even if you’ve never set foot in the beer can-strewn streets of west London on a sweaty bank holiday weekend, there’s much fun to be had listening to Notting Hill Carnival at 50 (Radio 1/1Xtra, now on iPlayer). DJ and fan Toddla T used to make a pilgrimage to the party from his home town of Sheffield and found the streets full of not just reggae, but jungle, garage, dub and hip-hop. “The perfect festival for my taste,” he says.

With a soundtrack of party tunes that takes in Jimmy Cliff’s The Harder They Come, Chic’s Good Times and KRS One’s The Sound of the Police, Toddla traces the carnival’s history from its origins as “a traditional English fair” to the tension-filled events of the 70s and today’s more mainstream gathering. It’s not just the music that brings the documentary to life; the eyewitness interviews with the main players of Notting Hill are frank and joyous. “Back in the day you used to have sound systems that if you look at them the wrong way you may not go home that night,” remembers veteran MC Ras Kayleb from Channel One. DJs would stalk each other around town looking for the best vinyl on a Friday afternoon and weren’t afraid to cut wires if someone else had a better sound system. “Now everything is love and there’s competition, but in a respectful way,” he says.

Norman Jay brought a different flavour in the 80s with his Good Times sound system that later became a landmark double decker disco bus. “In those days it was proper wild west,” he recalls. “Carnival started Friday lunchtime and finished Tuesday lunchtime and it was 24/7 the whole weekend. But the one thing that was missing – there was no soul, or funk or disco.” Not everyone was impressed with the move away from reggae and his choice of music brought some dubious gifts: cans of urine and death threats. “We were proper intimidated,” he says.

As Annie Mac explains, the ramshackle spirit of the street party lives on for today’s visitors. “You’re guaranteed to see some policeman dancing, badly, to dancehall,” she says. “And you’re guaranteed to probably pay more than £1 to go for a wee in someone’s house.”