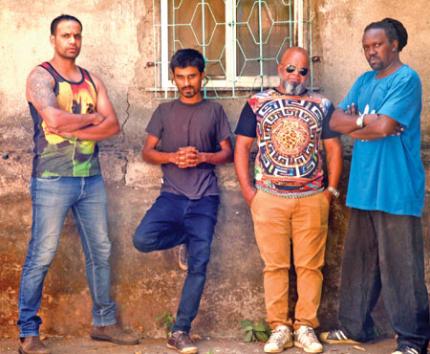 Though a mix of reggae, hip-hop, funk and rock, the members of the band Bombay Bassment say the music is a tribute and not a rebranded collective

It’s reggae, it’s hip-hop, it’s got funk and it is absolutely groove worthy. The Bombay Bassment is all this and more. Formed five years ago, the band stood out for its diversity with an interesting line up of musicians and genre bending music. One Mumbaikar, two Goans and one Kenyan make up the band. This year, after performing at the prestigious Glastonbury festival, the band is on a high roll and for the few lucky music-loving souls in Kochi.

So, who are these musicians behind such high energy music? Levin Mendes on the drums and Ruel Barretto on Bass are the original founders of the band. They were joined by M.C Bobkat (Bob Omulo) as the rapper and Chandrashekar Kunder aka Dj Major C. who is also the co-producer of the band.

Rapper Bobkat who was available for a quick chat, shares the band’s history, about their influence and their Glastonbury gig. Will this be the bands maiden performance in Kochi? “This is our VIP tour. We have already done shows in North India and now are going south. We’ve already performed in Chennai before, but this is the first time we are having a tour in the south,” says Bob.

How did people from such varied musical and cultural background come together to form the band? “Our drummer Levin and bassist Ruel had a collective. They were playing drum and bass, but they felt whatever they came up with was not complete and wanted to add more to it. At that time, Levin happened to speak to a friend of his who is a mutual friend of ours. So that friend suggested that he will hook us up, so we met and went to a jam room. By the end of the day, we were introduced to each other, we came up with our most famous track which is Hip Hop (Never be the same). Since then, there has been no looking back. The wide variety of sound that we produced is because of the different backgrounds we are from,” explains Bob.

The band members were already pulling in a good crowd as solo artistes with their own genres before the band formed. “I was doing a lot of recording and was also a DJ. Our DJ who is also the producer brings in a lot of Caribbean and reggae elements. Levin and Ruel come from Rock background. That way, we all came with our different musical influences and put it together to form a cocktail, which makes it such that you have to define our band as hip-hop, reggae, funk and all that,” he explains.

Although their music does not sound as complicated as it may seem with so many genres pooled into one, Bob says they chose not to give this mixed genre any new name. “We still differentiate it because our influences will always end up falling into one track, but our collective sound will be a collection of all of this. So we really can’t rebrand it because we are doing stuffs that already exist. It’s a tribute to the people that formed it, we’re not trying to steal it.”

Sharing their Glastonbury experience, Bob says, “We are signed with Mixedtape. One day they call us up and ask if we want to do Glastonbury (Music Fest).

So we were like ok, nothing to lose here and then we forget about it,” laughs Bob. “After a month, they gave us a call and said we were selected. It all happened so fast. Bombay Bassment making it to the Glastonbury fest is the highest point of our career. Higher than anything we could’ve dreamt of before that. So far, our journey hasn’t had much to complain.”

Does the band have an idea about the music scene down South? “What we know from the conversations we’ve had with promoters is that there is no indie (music) scene down South. We have always been like we should go and see it ourselves.

There is another school of thought that says, ‘there is an indie scene but it’s small.’ So indeed for us, this is totally a virgin territory. We don’t know what exactly it is, but we know for sure that there are people who love indie music. Regardless of how big or small it is, we are really excited about performing there.”

Source: Music with a slice of Mumbai | The Asian Age