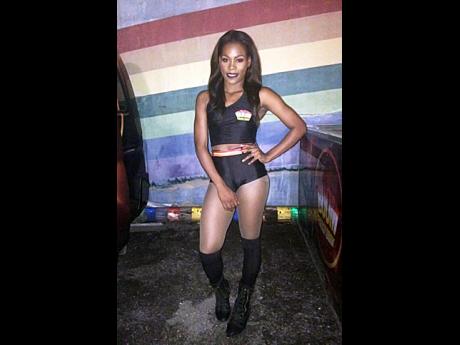 Dancer excited after ‘Bruk Back’ is featured in rapper’s video

‘Bruk Back’ has been one of the hottest dance moves on the local dancehall circuit in recent times. But after news that international rapper Kanye West incorporated the move in his latest music video, ‘Fade’, it seems the move is about to get its big break on the international market.

In an interview with Fader Magazine on Monday, internationally renowned choreographer Jae Blaze revealed that while working as one of the creative directors on the video, West gave specific directions to incorporate the dance move originally created by Tamara Graham from OutShine Girls.

“He’s such a genius, it’s ridiculous. The direction he was giving was focused on taking the movement she (Teyana Taylor, star of the music video) was doing to another level,” she said. “So, for example, there’s a point where Teyana’s doing a dancehall move called Bruk Back, created by these Jamaican girls called the Outshine Crew. This particular move was something he wanted to bring to another level.”

Blaze, who is of Jamaican descent, said dancers and artistes from Jamaica need to get more recognition for their creative talent.

“I wish that people would give more credit and exposure to the amazing dancers and dancehall artistes residing in Jamaica right now. They’re the ones who are spearheading this,” she said. “This is a culture, and there are people in Jamaica who need to benefit from their music and dance moves being exposed to the rest of the world.”

One person who is ready to benefit from the attention being given to Bruk Back is Tamara Graham, the creator of the dance. When THE WEEKEND STAR spoke to an excited Graham, she revealed that this might be her golden opportunity for getting the exposure she needs as a dancer.

“It’s hard as a dancer because you often don’t get the credit you deserve for the work you put in, but I’m really happy that someone as big as Kanye West has given the dance this kind of exposure. Kanye know wah gwaan, man. Him know hot dance,” she said, laughing.

“It has been doing really well here, and now it’s going to get the international highlight it deserves.”

Graham also said that the timing was perfect and she was open to the opportunities that might come with the exposure.

“Everything just a fall in place because I’m getting my visa together as we speak. I am ready for everything that will come with this highlight,” she said. “If it’s tours, I’m ready. If it will be to teach the dance to other people, I’m ready. This is a blessing and an opportunity to take OutShine Girls to the next level.”

‘Bruk Back’ was made popular through a song done by dancehall sensation Razor B. The entertainer told THE WEEKEND STAR that he was overwhelmed when he heard about Kanye West including the dance in his music video.

“It’s a big deal. It just goes to show that dancehall has no boundaries and continues to grow,” he said. “People are looking to Jamaican dancers and artistes for new moves, new ideas, and that is great.”