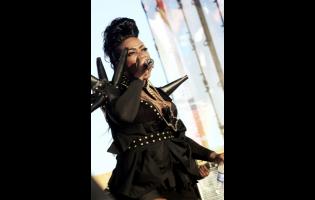 Dancehall artiste Spice has come out in support of a plan to offer franchises to promoters around the world to stage Sting in different locations on Boxing Day.

The concept, which is called One World Sting, was recently announced by Supreme Promotions, owners of Sting.

“I think that is a great move so that we can go worldwide and show our talent. Authentic dancehall festival would be represented worldwide on better platforms. A promoter in Europe may not know much about a performer here so (Isaiah) Laing would know to expose certain talents overseas. Its a big plus for dancehall,” Spice said.

One World Sting represents the second attempt in consecutive years by Supreme Promotions to rebrand its product. Last year, the organisers decided to omit clashes, which is a feature of the ‘greatest one night reggae show’.

Dr Donna Hope, writing on Facebook, said that the new Sting lacked venom and suggested that the creation of One World Sting is a step in the wring direction.

“Sting is based on lyrical clashes. Verbal sparring. Verbal venom. Lyrical Gladiators. Dancehall battles maybe? That is the brand. The big flop of Sting 2015 showed this. No lyrical sparring, No promise of excitement, No Sting. Sting has its own audience who have been following it from the 1980s – big age-able people who can pay to see it live in person or via live streaming,” Hope said.

“Re-branding at this stage is a recipe for failure,” she said.

However, Dr Everton Flemming, strategist and product developer at Supreme Promotions, owners of Sting, is adamant that the show will not lose its identity despite a change in its concept.

“One World Sting will deliver a global template to music promoters,” Flemmings insisted.

The concept behind the One World Sting involves offering franchises to promoters around the world to stage Sting in different locations on Boxing Day.

“The structure will define the methodologies of showcasing and maintaining the authenticity of the Jamaican music heritage. It will be managed by an international governance structure. This will be underpinned by a standard policy framework for the delivery of reggae/dancehall to the global market, thus providing international opportunities for our artistes,” he said.

Since the announcement of the move to create One World Sting, some fans have suggested that it could impact tourism if the product is offered overseas. Others have said that if the event goes global it will lose its hardcore fan base.