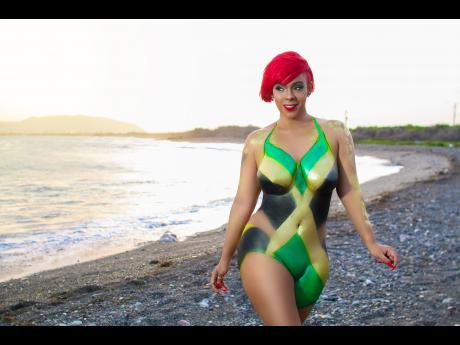 ‘I did not disrespect my flag’ … Danielle D.I. fights back amid backlash

Seemingly bothered by the backlash she received online for painting the Jamaican flag on her body in celebration of country’s success at the recently concluded Olympics, dancehall artiste Danielle D.I. is now attempting to put the brakes on bullies who have been attacking her on social media.

Following Jamaica’s Olympic team’s outstanding performance in Rio, Brazil, the controversial deejay had her body painted in the black, green and gold of the Jamaican flag. That, however, did not go down well with many persons, some of whom said she had disrespected the flag.

But Danielle D.I. is convinced she did not go too far with her body painting.

“I see nothing wrong with what I am doing, and I do not believe my photos were distasteful. My private parts were fully covered, and I am living my truth and showing love to my country,” she said.

“There is no way in heaven I would even try to disrespect my country and my flag. I proudly wear my Jamaican sash throughout the world. It is a matter of opinion because what is distasteful to one is artistic, creative, and fresh to another. I see absolutely nothing wrong with it. At the end of the day, I was fully covered and was wearing underwear. So I think there is nothing wrong with art expression.”

According to the Rebel singer, critics are biased and selective of whom they target, while international stars are given the freedom to live as they see it fit.

“I see girls like Rihanna and Nicki Minaj pushing boundaries and creating controversy. They are the hot girls of the world, and they have been making history without planning it,” Danielle D.I. told THE STAR.

Danielle D.I., who holds dual citizenship, also went viral on July 4 after she posted a photo on her Instagram page sporting a full body painting of the American flag. The image was one of the top trending images on Instagram globally, and was later reported by some viewers who felt the photo was too edgy.

Source: ‘I did not disrespect my flag’ …Danielle D.I. fights back amid backlash | Entertainment | Jamaica Star