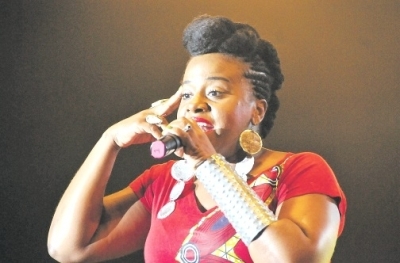 Facing backlash over her support for Republican presidential candidate Donald Trump, Etana has apologized to Jamaicans for endorsing the controversial real estate billionaire.

“My recent remarks were made against the background of the real fear of terrorist attacks and acts of random violence that are so pervasive in the US right now. But I realize now that

I cannot give in to this fear…we cannot build walls to lock ourselves in and other people that we fear, or we run the risk of isolating ourselves and losing our humanity, a quality we must protect at all costs. We must not allow fear to allow us to lose the best part of ourselves, the ability to love unconditionally, and to connect with our fellow men and women, regardless of their beliefs, religion, or ethnicity,” the singer said in a statement.

In Monday night’s first debate against Democratic candidate Hillary Clinton in Hempstead, New York, Trump was repeatedly challenged about his controversial claims that President Barack Obama was not born in the United States.

Interestingly, the 33-year-old Etana is known for songs such as Wrong Address and Roots which tackle forms of racial profiling and promote black pride.

She migrated to the United States in 1992.

Source: Etana takes it all back – Entertainment – JamaicaObserver.com