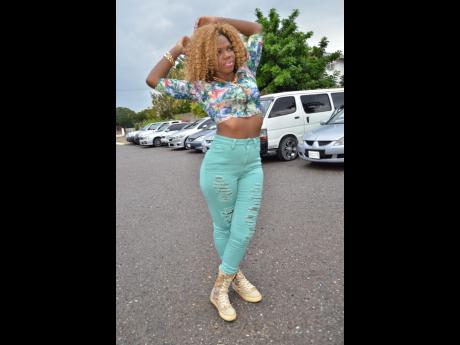 The year 2016 is shaping up to be one of the most challenging years for recording artiste Baby Tash, as not only did the deejay lose her grandmother during the Summer, but she also lost her house in Spanish Town to fire last weekend.

While ruling out arson, Baby Tash said her family lost almost everything during the fire.

“The fire was caused by a single candle that was lit in one of the bedrooms during the blackout. The only thing that was saved is a chest of drawers and a dresser. Everything else is completely wiped out and gone, and it was a three bedroom house. It’s just the concrete structure that is left. It’s shocking to see how fire can destroy everything that you have built in a matter of seconds,” she said.
Receiving support

An officer at the Spanish Town Fire Department confirmed the incident.

“A single fire unit arrived on the scene of the three bedroom house at 9:51 p.m., however they could not get the fire under control. They had to request back up, that’s how bad it was. It was fully extinguished at 10:30 p.m. The cause of fire has not yet been established. We are waiting on the fire prevention department to determine that,” he said.

Luckily, Baby Tash said she has been receiving support from her fans and persons in the music industry as she tries to regroup.

“I want to thank all my friends, fans and musical family who have reached out to me. I have been staying in Kingston for the past five years, but my mom, sisters and nephew were living in the house in Spanish Town. They will now be staying between my place in Kingston and my brothers house until we regain some sort of normality. My mother loved that house, and it’s her work so she just wants it back,” she said.
Work harder

With this setback, Baby Tash said she is even more determined to pursue her goals.

“I realise that situations like these really penetrate my creativity. I write a lot of songs, poems and stories, and I really just pour my emotions unto paper. This is making me work harder and I cannot give up because I want to make my mother happy because a home is her happy place,” she told THE STAR.

“I want to buy her that dream house so that she can be happy and comfortable. God has a plan and all we have to do is just believe. It’s a very emotional time for us right now because we grew up in that house so we have a sentimental attachment to it. I just lost my grandmother so this year has really been a hard year for the entire family.”