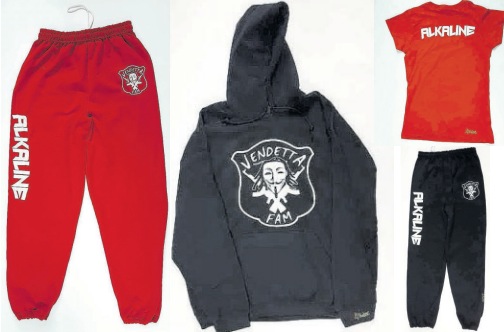 Dancehall artiste Alkaline is looking to expand his brand with the addition of a clothing line. The Champion Boy deejay will be launching his Vendetta Apparels early next year.

The brand will include hats, T-shirts and joggers.

“This idea started partly as uniform for our road team and later transpired into a clothing line by popular demand. Persons can look forward to Vendetta-branded apparels for both male and female, all of which can be purchased via our website, alkalinemusic.com,” said Kereena Beckford, a member of his management team.

According to Beckford, Alkaline and the team are focusing on the business side of music.

“Various types of styles will be featured, and we will have various courier services available to facilitate purchasers’ locations. We are not just giving great music, but also great style — the Vendetta lifestyle,” Beckford added.

Alkaline is still enjoying some success from his debut album New Level Unlocked, which currently ranks on the Billboard Reggae Chart.

Last month, his hit single On Fleek was named Dancehall Song of The Year at the recent Hapilos 21st Awards show at Limelight club in Half-Way-Tree, St Andrew.

His other songs include Block and Delete, Pressure and Full a Gyal.