Today, the ganja farmers of Jamaica will need PhDs in the subject if they are to compete with their counterparts in Amsterdam, writes columnist Dotun Adebayo 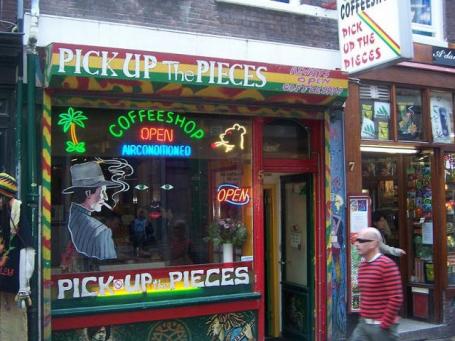 SMOKE JOINT: A popular coffee shop where cannabis can be smoked freely in Amsterdam

“MISSISSIPPI GODDAM”, sang Nina Simone. The ganja farmers of Jamaica should be chanting “Amster(god)dam” to the same tune but with a reggae riddim. Because just as Mississippi undermined black people in the USA 50 years ago, so do the ‘coffee shops’ of Amsterdam today.

It wasn’t my choice for our annual father/daughters summer holiday without mom/wife. Blame it on the 15 year old. She’s the one who was desperate to go and visit Anne Frank’s house (the biggest tourist attraction in the city). I had been to Amsterdam several times before and my experiences were never great ones. That was back in my hitch-hiking days when, let’s face it, my budget could barely stretch to a cookie. Especially as back then (30 years ago) they wanted a quid for one cookie when back in Tottenham I could have picked up a whole box of cookies for that princely sum.

“Yes, but this cookie is VERRRRRY good’, the hippie cookie seller assured me. And the customer standing beside him agreed with a knowing nudge-nudge, wink-wink.

I never did find out what was so VERRRRRY good about that cookie. Or what was in it. But I have a pretty good idea. This is Amsterdam after all.

And last week, we were in the centre of it all.

Call it spliff alley if you like, but you couldn’t walk 50 yards in any direction from our air b&b without being knocked out by that distinct whiff of the evil weed coming from the so-called ‘coffee shops’ where you can probably get every type of spliff known to man but you would be hard pushed to get a cappuccino.

ILLEGAL
And they say weed is illegal in the Netherlands (yeah, right).

You have got to hand it to these Dutch. They know how to speak with fork tongue when it comes to turning a buck.

Going into a coffee shop (for research purposes only, you understand) you are immediately struck by the organisation of what is generally no more than a tiny lock-up shop.

They have a menu! From which you can order a Vanilla Kush, a Chronic Thunder (a new indica vintage 2013) or a Laughing Buddha (which is a Thai/Jamaican sativa). Or you can go straight to the Cannabis Cup winners – Tangerine Dream (2010) Liberty Haze (2011) and Cookies Krush (2014).

And if you don’t know one from the other, the guy behind the counter can recommend one or two depending on how you want to feel by smoking.

“You wanna feel chilled, relaxed, or you wanna buzz…?” he asks in that distinct Dutch accent that we hear their footballers speak on Match of the Day.

As you can tell, we’re not talking about your little neighbourhood weed vendor. Ganja is big business in Amsterdam, one gram at a time. I think it’s fair to say, most of the young people visiting the city are there for only one thing.

Apart from my daughters, that is, who I am proud to say are part of a non-smoking generation and have yet to be corrupted by spliffheads to go down the budding stars road.

So it was left to me to check out these ‘coffee shops’ – for research purposes only, you understand. How else would I have been able to write this column if I hadn’t visited such an emporium? And it’s essential. Because if Amsterdam is making millions from spliff tourism every year, then why not Africa, why not the Caribbean? What lessons can Jamaica, for example, learn from the Amsterdam spliff experiment and how much more money will the tax man of Kingston make now that the government there explores the possibility of the ganja tourism that it has fought against for so many years?

I tell you, Bob Marley must be rolling around in his grave with laughter. More so my mentor and big brother Peter Tosh who took me around Europe on tour when I was a teenager. I haven’t forgotten how much fight they got back in the 1970s and the little of the 80s they endured before both their lives were tragically cut short. Look how many years Bob and Peter said ‘Don’t fight the weed.’

Decades later, their music lives on, not least in the coffee shops of Amsterdam.

SOUNDTRACK
Reggae is and has been the soundtrack to smoking spliff. There is no getting away from it. It is even more pronounced in these Amsterdam coffee shops where reggae is the soundtrack. You hear the reggae and you know you’re gonna get smashed – tune in and tune out. It is Jamaican music that underlies this huge industry. Subliminally, it is black people.

On the walls of the coffee shops the image of Bob Marley is the only advertising that is needed because Marley made it cool to smoke while the poor ganja farmers up in the Blue Mountains were getting so much fight from the authorities. Marley’s fight was always for the poor people.

MESSAGE
If the Jamaican authorities had heeded his message long ago there would be less poverty in Jamaica today, because back in those days it was Jamaica which was the world leader in ganja. The whole world wanted it and it was being shipped coast to coast by unlicensed light aircraft some of which still litter the countryside of the island where they crashed.

Now, though, because of the fight they got from their own government, the poor ganja farmers of Jamaica have been usurped by the hippy biologists of Amsterdam whose government is very happy for them to offer a spliff for every single mood you would like to feel as long as the tax revenue keeps coming in.

Today, the ganja farmers of Jamaica will need PhDs in the subject if they are to compete with their counterparts in Amsterdam. Because spliffhead tourists will not just go to the more beautiful destinations, they are looking for the places where they can ‘legally’ feel the precise mood they wanna feel.

Dotun Adebayo is Britain’s most listened-to black radio talk show host. He presents ‘Up All Night’ on BBC Radio 5 live Thursdays through Sundays on 909/693 MW. ‘The Sunday Night Special’ on BBC 94.9FM and ‘Reggae Time’ on BBC London 94.9FM on Saturday evenings. Tune in if you’re ranking!b