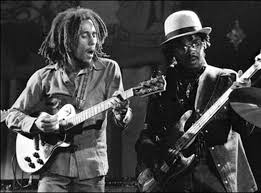 Former members of Jamaican reggae band The Wailers, which played alongside Bob Marley, are going to court to try to stop the group they left from performing under the same name.

Aston ‘Family Man’ Barrett and other ex-Wailers members said in a petition filed in a Virginia Beach court this week that the reggae group currently performing as The Wailers is a sham because it includes no members of the original band. They are asking the court to act quickly and block the band from using the name, noting that it is set to play in Virginia at the Lockn’ Festival this weekend.

The court set a hearing for August 31, said attorney Stephen Screnci, who is representing Barrett and the others. Asked if that meant the band would still be allowed to play this weekend, Screnci said he didn’t know for sure.

“There’s a lot of people buying tickets that think they’re going to see The Wailers and they’re not,” he said of the current band in general. “If you advertised as The Beatles and you showed up and there were no Beatles, I think you’d be disappointed,” he said.

Al Anderson, Tyrone Downie and Earl Lindo, who each joined the band in the 1970s before Marley passed away in 1981, are also joining Barrett in the case.

Michael Jones, who currently manages the band that performs as The Wailers, said Thursday that he hadn’t yet read the filing. But he said that dozens of musicians have played under the Wailers name over the years. The current band is “what’s left of the same band that has played continuously since 1981”, Jones said.

“It’s a revolving door of musicians that have played with The Wailers. It always has been,” Jones said. “We have a wonderful band that is recognised worldwide as The Wailers.”

No one responded Thursday to an email sent to Monterey International, a booking agency named in the filing.

Barrett, who joined The Wailers in 1969 as its bassist, left the group several months ago, but the band continues to use his name and likeness in promotional materials, the petition for injunctive relief says. Barrett and the others accuse the group of deceiving consumers and concert organisers by leaving the impression that original members are still part of the band.

“Not only is defendants’ use of the name damaging to plaintiffs in terms of profits illicitly gained by defendant; every poor performance by the sham Wailers and every poor experience a consumer has with defendants reflects negatively on the plaintiffs, especially for consumers that attend defendants’ shows expecting to see members of the original band The Wailers,” the filing says.