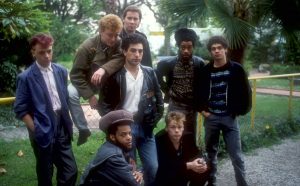 It was February 2008 and UB40 were appearing in Uganda. Over the previous three decades, the Birmingham band had sold 70m albums; they had even achieved the rare feat of taking reggae to the top of the UK and US charts, with their take on Neil Diamond’s Red Red Wine. Their lineup had remained stable for 29 years, rare enough for a four-piece, let alone a band with eight members. However, the Kampala gig – before 35,000 cheering fans – was their last with singer Ali Campbell. “I’d just done nine dates in Australia where I was following the band around, undoing the damage they were doing in interviews,” Campbell says. “The gig wasn’t emotional, for me. I was just too angry.”

The band’s guitarist agrees with that, if not much else – which would be par for the course, were he not Ali Campbell’s brother.
ADVERTISING

“Ali didn’t even talk to us,” remembers Robin Campbell. “He had his own bus and hotel. He left the band after the show and hasn’t spoken to us since. We spent the next five years proving to everybody that we could still be UB40.”

Today, as a result, there are two bands with UB40 in their name. There is UB40, down to five of the original eight members, who have replaced Ali with another Campbell brother, Duncan. Then there is Ali’s band – UB40 featuring Ali Campbell, Astro and Mickey Virtue – which recognises that he has been joined by the two other original members. Ali calls his brothers’ camp “the dark side”; they refer to Astro – the last to swap sides – as “Judas”. An ongoing legal battle over the band name has already cost both camps £250,000 each. Robin and Ali have both been been declared bankrupt.

UB40 are not the only band divided into competing factions. New Order’s estranged bassist, Peter Hook, tours their old songs with the Light, Yes have said no to each other, Stiff Little Fingers flick the Vs from camp to camp and Sham 69 have divided. But UB40’s case is the most surprising. Both Campbells describe the original lineup as “a band of brothers”: they were staunch socialists who split everything eight ways from the beginning. Yes, there were certainly lifestyle differences, the scourge of many a band’s longevity. Robin says the band’s hedonistic party heads and non-drinking straights travelled on separate buses – “the ragamuffins” and “the library”. His brother was a ragamuffin, Robin a librarian. “But we were still a gang,” he insists, “and sometimes members would migrate from one bus to the other.”

What did for UB40 was the age-old problem of money. In the 80s and 90s, as a stadium act, UB40 seemed to have struck pop gold. “The management told us we’d never need worry about money again,” Robin says. “We took time off and bought houses with wads of cash. Then, five years later, [we] were suddenly told that there wasn’t a penny in the pot, that we had no savings, no pensions.” As one manager walked away and others came in to examine the books, the full horror was revealed: they weren’t just broke, but in debt.

Because UB40 – at one point the third- or fourth-most radio-played band in the world – hadn’t been registered for airplay royalties outside Britain, they had missed out on what Robin says is “10s and 10s of millions of pounds”. Ali now accuses Robin’s band of “skullduggery”, while Robin retorts that Ali is delusional, that he left to chase solo stardom and can’t accept that the internet has changed the music business.

“Ali changed,” he says. “He became more and more disgruntled that we weren’t selling records like we used to, weren’t being played on the radio, and our business had died on its arse. We were still playing big gigs and earning good money, but it wasn’t good enough for Ali.” The ruckus divides the fan base, but while Ali suggests his brother’s band are “playing pubs”, they have a tour of Britain’s Academy venues lined up this autumn. Both camps insist they will be in arenas again next year.

Stiff Little Fingers’ original guitarist, Henry Cluney – who now fronts XSLF alongside former SLF drummer Jim Reilly – also knows how once-close bonds can descend into acrimony. The band’s 1979 debut, Inflammable Material, which blisteringly reflected the lives of teenagers in the Belfast of the Troubles, is a punk classic, but Cluney was suddenly forced out in 1994. He suspects it was cheaper to hire a replacement on a wage than to keep on a full member.

“The manager told me: ‘Your services are no longer required,’” he says, over a curry before an XSLF gig in Leeds. “I thought: ‘What? I formed the band. At the time, to say it was acrimonious is an understatement. I wanted them all to die.” He has since mellowed, but, back then, there was more to Cluney’s dark moods: althought he didn’t yet know it, he was suffering a “personality change” caused by a brain tumour the size of a baseball. In 2013, long since recovered, a chat with Reilly convinced him he wanted to play all the old SLF songs again. However, with singer Jake Burns and bassist Ali McMordie part of an ongoing SLF lineup, Cluney and Reilly went it alone.

“You realise what’s important to you,” Cluney says. “I have as much right as anyone to use the name Stiff Little Fingers, but XSLF says what we are: ex-SLF. I don’t mind telling you that sometimes the audiences are small, but the way I look at it is it’s fun. If it’s not, you might as well be working in a day job.”

It perturbs Cluney that while his old mate Burns – the sole surviving original member in the official SLF – was one of the first to wish him well with his surgery, relations between the pair have since cooled. “I have to contact him through someone else’s Facebook group and that’s just ridiculous,” he sighs. “Jake taught me to play guitar. We’ve known each other 40 years. I miss Jake and don’t mind saying that.”
New Order in the 80s

Some groups manage to cleave in two without even splitting, creating periods in their history that become irreconcilable. Take Yes. When guitarist Trevor Rabin joined the progressive rock legends – who reunited in 1982, little more than a year after splitting – he replaced Steve Howe, who had played with them since 1970. Rabin received hate mail from fans who didn’t approve of the band’s new pop-rock direction, typified by his song Owner of a Lonely Heart. “At the first show, someone held a sign up reading: ‘Bring back Steve Howe,’” Rabin says. “When Steve rejoined, he initially refused to play my songs or my solos.”
Advertisement

Howe didn’t rejoin in any conventional sense. Instead, he was part of a merger of two groups: Anderson Bruford Wakeman Howe, which featured members of the old Roger-Dean-covers-and-20-minute-songs Yes, and the MOR, 80s Yes of Rabin. The album they released – 1991’s Union – didn’t feature all the musicians playing together at all; it was such a dog’s dinner that Rick Wakeman refers to it as Onion (because it makes him cry). This version of the group, Rabin says, was “chaotic, like having two centre-forwards”. Now, while the current Yes lineup features Howe, but no founding members, Rabin has reunited with singer Jon Anderson and Wakeman – as ARW – to tour Yes songs. Rabin insists that, as with Cluney, the motivation is primarily emotional: it took root, he says, after founding bassist Chris Squire’s death from leukaemia last year.

“The memorial was at my house, with his Rickenbacker set up with lighting,” Rabin says. “I spoke to Chris just before he passed. He was in a terrible state, but kept saying: ‘I can’t wait to get back on the road.’ He never thought he wouldn’t be able to. So we’re playing the songs he would have. I loved him like a brother. When we hear his parts, it’s going to be very emotional.”

Within the factions in these groups lie deep-rooted relationships and feelings. Robin Campbell says that his younger brother “didn’t just leave a band, he left a family”, with their 84-year-old mother in the crossfire. Ali felt “sideswiped” when Duncan replaced him and hasn’t spoken to him since, which has left the latter heartbroken. Their father was also a musician – Ian Campbell Folk Group were a key group in the 60s British folk revival. Just before his death from cancer, in 2012, he received a Radio 2 Folk award for his outstanding contribution to music, but he devoted his acceptance speech to UB40.
Yes in 1974

The brothers can’t even agree on what they thought of that. “He got up and said: ‘Do you know who I am? No. I had two sons who outsold my entire career with their first album,’ Ali says. “He was bitter, resentful and jealous of us.” Robin and Duncan, though, found it deeply moving. “It was his first ever public tribute to us, his award, and yet he said: ‘Look at what my lads have done,’” Robin says. “I watched it with tears running down my face.”
Advertisement

So won’t these sadly estranged bands just do what their fans would like most and get the classic lineups back together?

“I think it would be great, but it’s going to take four people,” Cluney says of SLF.

“I’ve had to reinvent myself while my brothers are murdering my songs and legacy,” Ali Campbell says. “My UB40 are the hottest reggae band on the road. I wouldn’t dream of going back.”

At least the feuding brothers can agree on something. “I’ve lost all patience, all love,” Robin admits towards the end of a “cathartic” three-hour conversation. “I know a lot of bands say that and then get back together, but in our case it really will never happen.”

Source: UB40, Stiff Little Fingers and Yes: the bands that split in half | Music | The Guardian