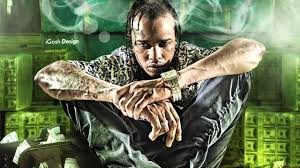 No recording session by a dancehall artiste is complete without the obligatory weed break. For Goth deejay Tommy Lee Sparta, there was plenty of ‘high grade’ to go around recently at a St Andrew studio.

Just days after performing at Reggae Sumfest, the controversial artiste was back in the recording booth cutting songs for an album and EP he hopes will be released this year.

Some of his new songs, such as Angel and Felony, will be part of his set on a European trip in October.

It is the 28-year-old’s seventh trip to the continent where he says his brand of dark dancehall has a big underground following.

“The first time mi go was 2011 an’ each time wi go back di thing jus’ get bigger,” said the slender Sparta as he built a ‘spliff’.

He will also perform club dates in Belgium, The Netherlands, Finland, Austria, Germany, Switzerland and France.

Brushes with the law — which include alleged ties to the lucrative lottery scam in his native Montego Bay — have kept Tommy Lee Sparta from going to the United States, dancehall’s biggest overseas market.

He is anxious to make an impact there, given recent interest in the genre by major stars like Rihanna, Justin Beiber and Drake.

According to Tommy Lee, he is confident his ‘flow’ would be a hit with US audiences.

“Dem love Goth, yuh nuh, an’ dat a wha’ wi a pree right now…darkness, not violence,” he explained. “Yuh have melodies an’ metaphors wha’ dark; dat sen’ out a energy.”

The Goth movement has always had a massive following, going back to the 1970s with David Bowie, Black Sabbath and Alice Cooper.

In the 1980s, it got even bigger with British acts like Ozzy Osbourne and The Cure. But to get up-close with American fans, Tommy Lee Sparta needs a US visa which he has been denied.

“Wi a pree music but people misunderstan’ mi. Mi always dey pon good behaviour; nobody neva hear Tommy Lee a war or pop fight a any show, so wi hope things will change an’ wi get a chance,” he said.