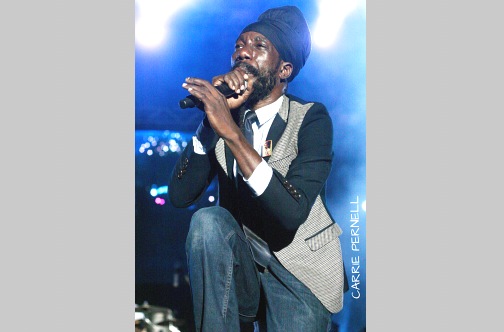 eggae artiste Sizzla performing at the Reggae on the River music festival in California. The event marked Sizzla’s first performance in the United States in the past eight years. (Carrie Pernell)

ORGANISERS of California music festival Reggae on the River (ROTR) are describing headliner Sizzla’s performance as nothing short of electric.

The festival, which has been staged for the past 32 years, saw Sizzla’s return to performing in the United States following a suspension of his US visa and work permit for the past eight years.

Justin Crellin of ROTR said the dreadlocked artiste (given name Miguel Collins) lived up to expectations.“He put on a very high-energy set and he was clearly excited to be there. The venue was electric with fan excitement too. Many are calling it the best Reggae on the River ever, and I certainly felt it was our best production in the four years. We’ve been back at our original French’s Camp venue,” Crellin told the Jamaica Observer.

“We were ultra excited he was coming and to have his first US date be ROTR was a homecoming of sorts. We’ve been trying to work on this for some time and this year things were far enough along with this status that we all felt confident. It took longer than expected but we worked closely with his team and were well aware of where things were at in the process, and why we felt confident to hang in there,” Crellin said.

As for the other stand-out performances on the festival, which ran from August 4-7, Crellin said he was pleased with the showing of some of the younger reggae acts, who held their own against the music’s heavyweights.

“Fans were really excited about the line-up this year, and we’ve been getting great feedback on the whole programme. We were happy to see a lot of excitement for some of the younger artistes like Protoje, No Maddz, Jesse Royal, Keznamdi, Jah9, Mr Williamz, Gappy Ranks, and Ziggi Recado. Several of the more ‘world’ artistes really impressed too — Mbongwana Star, Fatoumata Diawara, Democratoz, were well received. And Anthony B was on fire Sunday night to close out the show on a perfect high note.”

As for next year, Crellin and his team have already started working.

“ROTR is ever a work in progress. We are already talking about the changes/ improvements we want to make. So I expect next year’s presentation to be even better. Dates are August 3-6,” Crellin added.