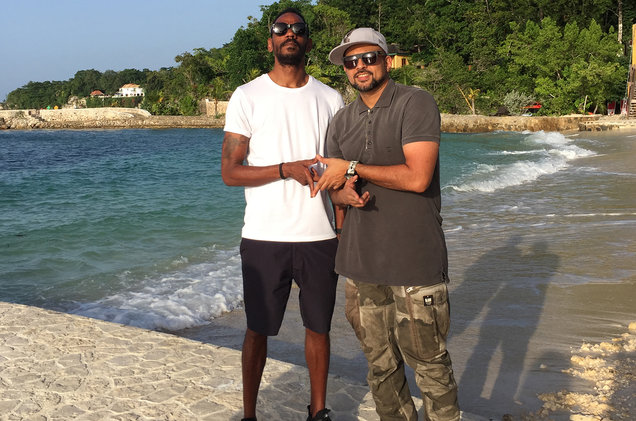 Fresh from helping Sia land her first number one on the Billboard Hot 100 with “Cheap Thrills,” Dancehall star Sean Paul has inked a global deal with Island Records, a label indelibly associated with reggae music and the Caribbean through its championing of Toots & the Maytals, Sly & Robbie and, most famously, Bob Marley.

The multi-album deal will see the Jamaica-born artist and producer release future works on the Universal-owned label in both the U.K. and the U.S. and brings an end to his brief run as an independent artist, which followed the end of his decade-long partnership with Atlantic in 2014.

“He’s one of the very few reggae greats to have gone global. What Sean has done for Jamaica and helping reggae music cross over makes him nothing short of a cultural icon,” Darcus Beese, president of Island Records U.K. tells Billboard.

“I don’t think there’s anything more potent or authentic than Island Records sitting down with a reggae artist of his caliber and having a conversation about signing them. It’s absolutely a natural fit,” says Beese, who played a key role in brokering the deal, flying to New York to meet the artist and his management team within 24 hours of first being approached.

“We’re in it for the long term,” adds the London-based label head, calling Paul a “global music star” who makes “exciting, forward thinking and hit-driven music” that crosses borders worldwide. With the first fruits of the new label deal due this fall, Billboard spoke to Sean Paul about joining Island, falling out with Atlantic and collaborating with David Guetta, Shakira and, of course, Sia.

Billboard: You’ve been independent for over a year now. What was it about Island Records that made you want to once again partner with a major label?

Sean Paul: Island is an iconic label. From when I was a kid I have heard and loved many artists on their roster, so it is a very familiar name to me. It was also just a very good offer – something that gives me great creative control and the space to experiment, which I’ve always wanted. When it comes down to music there are times when I just want to express myself and be an artist and not be told how to do that. The deal that Island offered me gave me that space that I’ve been searching for quite some time. I’ve had success with other labels [in the past], but we got in each other’s way.

Was that what happened with Atlantic? Were you not granted creative control there?

It wasn’t understood of me. With a big company like that they mass produce the artists and mass produce music, they clump everything together. For instance, a big producer gave me a rhythm track and I loved it. I [record] it and leave thinking: ‘This song is mine.’ And then a year later when I’m trying to put my album together I hear that another artist from the same label wanted it and did it before me. Things like that were happening that didn’t make sense to me. The reason producers do that is because labels have them on a cookie cutter kind of deal: ‘We pay. You just give us hooks, put artists together, switch it up and give us the best things.’ Things like that was kind of crazy to me. That my work would be chopped up with other people’s stuff. Even if I didn’t like the artist, now he’s singing a hook that I was involved in and I had no say. Those things were happening and it pissed me off.

Can you give any specific examples?

A song was presented to me. I loved the hook and was told do a version. I did it. Finally put it out and then someone on the internet writes to me and says: That’s Ryan Tedder’s song and it’s been out on his SoundCloud for like a year.’ I’m like: ‘Wow. That’s how I find this out?’ The song was “Got 2 Luv U.” The hook was by Ryan Tedder and it came out on his site a year before. The day I put it out I’m having a disgruntled fan, or some hater fan who doesn’t really like me anyway, say: ‘You’re just putting out other people’s work.’ So things like that started to reoccur and just got me in a very sad place and bad vibe. For the past year I’ve been at home doing a lot of dancehall and step outs with different artists but not with a record label. I’ve been independent and some great things have started to happen because of the steps that I was allowed to take and I was allowed to take them because I was independent. Now I have got a deal with Island where they recognize that ‘he knows what his fan base needs and knows exactly what he wants to put out. We don’t need to help him in that direction. We need to facilitate people knowing about his work.’ That’s just a great thing for me.

When can we expect to hear new music?

There’s thousands of songs, bro. I’m working on a competitive basis day to day. I’m now about to go to LA for another writing session with different producers and artists. It’s a continuous process for me. I’m trying to drop a single in November. I’m on Tory Lanez’s remix, which is a song called “Luv.” That’s dropping in September. I’m also putting out two warm-up singles. One is called “Trumpets” and it’s been out a few months now. And I’m about to put out another one called “Crick Neck,” which features an artist from Jamaica called Chi Ching Ching and he’s got a huge buzz down here and we also have a friendship, which was important to me. The warm up singles will be followed by the big single, which I’m actually still working on. I may beat what I have in LA, so we’ll see how that goes. If I don’t beat what I already have we’re going to present a big song with a big artist.

I’ve been working with many different producers — Da Beat Freakz being one of them. I can speak about a song I did with Shakira recently. I’ve wanted to work with her for a long time and it’s a production by David Guetta. I think it’s going to be called “Temple.” It’s more of a dancehall EDM type thing. David Guetta put his special touch on it. He’s a very amazing producer. Just when I thought he can’t find no better hook than this one, he finds a better hook. I love the tone of Shakira’s voice. It stands out. She’s an amazing dancer and performer. I always love Latina ladies, so I’ve been a fan of hers for quite some time.

I can also tell you that I have songs with people like Afrojack, Da Beat Freakz, Clean Bandit. There’s so many amazing producers that I have been able to work with. It makes me feel new all over again. I can also speak about a song that I have done with Wizkid and we’re also looking to do another collaboration also, so there’s some big things coming out. As for what the big single will be, I’ll know after this trip to LA and I’ll see where that takes me. I’ll hear from the fans if the direction I’m going is something they like and then I’ll be able to put the album together for sometime early next year.

What was your reaction when Sia first came to you about guesting on Cheap Thrills?

I just thought: ‘What a big sound, nice hook and melody she had put down.’ I’m a huge fan of her voice. She spans generations. My mum is a big fan of her voice and her songs and writing. I can’t believe “Cheap Thrills” is the only song that she’s had that went to number one on the charts. When I heard that I was shocked. I could have sworn that she’d had other songs at number one because I’d heard them so much on the radio and TV. For me, she’s been a number one artist for a long time.

Was the success of “Cheap Thrills” all the sweeter for coming ten years after you last topped the Hot 100?

That was an amazing feeling. There’s a real resurgence of energy within the whole group of people who work with me. New ideas are coming and that’s always good. For the ten years that I was not being on those charts you would hear the question: ‘Where have you been? You went away.’ No. I’m always in the studio. I’m always touring. Maybe I’m not on the big shows that you see on your TV, but I’m always touring. That’s how I keep this whole thing alive. Those ten years were spent wisely doing every collaboration that I could that made sense. The studio is a daily part of my life. Even when I’m on holiday I take my computer and my drum machine with me in this ten pound nap sack, which everybody says I’m ridiculous for. But it’s a work ethic that’s embedded in me. On top of that, it’s the most fun part of my job.

How do you feel about the current mainstream popularity of dancehall and reggae?

I’m loving the resurgence of dancehall. Right now Shakira is working with one of my old producers from Jamaica trying to find something that’s hot and dancehall is hot again. It’s a great resurgence. So when international people come to do dance hall and when they send me things, I can only feel proud. I don’t feel offended. I jump on it and think: “let me see how I can make this more appreciable to Jamaican people and bridge the gap?’ From that it turns into something new. When Enrique went on a dancehall track [with his 2014 single “Bailando”] it made me so enthused for the whole genre. And when people like Drake and Popcaan collaborate [on “Controlla”], that’s just a great thing. Dancehall has now become mainstream international music, rather than underground where it was for years.