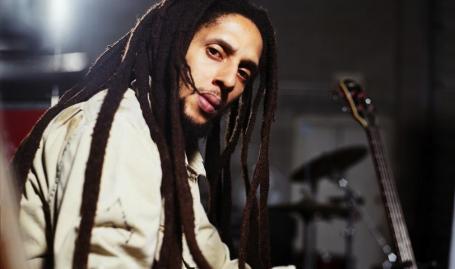 A LIVE show from Julian ‘Ju Ju Royal’ Marley is something special. Currently on an extensive tour, the schedule he has undertaken across the globe has helped him master his craft and contributed to him becoming a seasoned performer.

Surprisingly though, the son of reggae legend Bob Marley has never embarked on a UK tour.

“Everything happens at the right time”, says Julian, who was born in London in 1975.

“I have played in the UK before but not as a full tour, so I’m excited to play for the people, and want them to come out and hear what we have been doing around the world.”

As a child, Julian frequently visited the Marley family home in Jamaica, and in his teens, he moved to Jamaica and began working with a host of the island’s renowned musicians, including, Aston ‘Family Man’ Barrett and Earl ‘Wire’ Lindo.

Still, with his formative years spent in the UK, Julian’s affinity to Britain is clear. “It is one of my homelands because I was born there,” says the singer and musician, who was raised by his Bajan mother, Lucy Pounder. “So the UK is part of my roots, along with Jamaica and Barbados.”

The last couple of years have been particularly busy for the 41-year-old.

“I have been working on my next album for the last 12 months and the entire project has been completed independently. That means it takes a bit longer than we would have hoped, but the artistic and musical freedom that we have had to create what we want was definitely worth it.”

So what can we expect from his fourth full set, 20 years after his debut album, Lion In The Morning?

“It’s very upbeat,” he says. “We have branched out on our subject matters – everything from talking about beaches to the need for compassion around the world. I’m very proud of what we have created and we are now just mixing the final product. Jah has blessed us with the tools to create this music.”

His commitment to the message is clear – and he is determined to engage with those who want to listen.

His previous tour saw him alongside his father’s band, The Wailers, as they performed throughout Brazil.

“That was amazing. It was good to see the two generations mix and create something special. It was like going out and performing night after night with your uncles – a really special vibe. I’m sure the elders who set the path, people like my father, Peter Tosh and Bunny Wailer, will be pleased with what we did.”

It isn’t just music that consumes Julian’s time – his business interests now extend to the emerging Vape Pens (a type of e-cigarette) market.

“I licensed my name to a business who operate in the Colorado legal herb market and I have a strain which I endorse. I’m very involved in it because we have been praising the positive properties of herb for years – now it cannot be denied and the wider world is sitting up and taking notice.

“The Pens are part of my Ju Ju Royal range and this is an area we will be putting our focus on in the forthcoming years.”