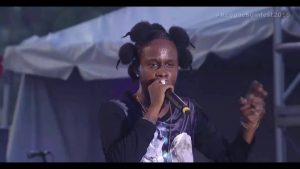 Popcaan’s Love Yuh Bad is enjoying much attention on the international scene. The song is sampled in Drake’s Too Bad, which features Rihanna.

Love Yuh Bad is featured on Popcaan’s 2014 debut album Where We Come From, released by Mixpak Records and produced by Dre Skull. The album reached number two on the Billboard Reggae album chart and has to date sold over 7,000 copies.

This is not Popcaan’s first international run. He has charted in the United States with Only Man She Want which reached number 88 on the R&B Hip Hop Songs chart in 2012. In the UK, he charted with two singles: he is featured on Aluna George’s 2016 hit

I’m in Control which reached number 39; and a number 10 on collaboration with Melissa Steele entitled Kisses for Breakfast in 2014.

Popcaan won the MOBO Award for Best Reggae Act in 2015.

The song was produced by Nineteen85 (who has Jamaican parentage) and Jamaica-born Dwayne ‘Supa Dups’ Chin-Quee.