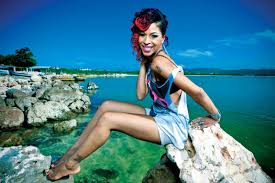 September is kicking off in high gear for multi-media maven “Diva Nikki Z” with hosting duties at the “High Vibes Jamaica, Roots & Regage Festival”, and acting debut in Nick Cannon “King of the Dancehall”.Set over the US Labor Day Weekend holiday in the unique and unbeatable location of Montego Bay, Jamaica “High Vibes” will give patrons the chance to experience the heart and soul of reggae music and learn about Rastafari religion and lifestyle. The festival promises to deliver an exciting weekend celebrating Rastafari culture, roots and reggae – featuring first class music events from Grammy award-winner Beenie Man, Grammy nominated Hip Hop star Rick Ross, Ky-Mani Marley, legendary Lee “Scratch” Perry among others alongside an unbeatable vendor exhibition.

The start studded even will be hosted by international hostess Nikki Z, Hollywood movie stars Jamaal Woolard and Miguel Nunez, and Yanique from Fame FM.

Speaking on the event promoter stated “High Vibes is a music and cultural event that offers a unique balance of experience and entertainment showcasing the best of Jamaican music and culture with world class talent and production.” Adding “I think Nikki Z is a perfect fit for High Vibes. We believe she embodies progressive thought and a real desire to showcase the exceptionalism of the Caribbean at a world class level.”

For more information on this unprecedented event please visit www.HighVibesJamaica.com

Nikki Z and Nick Cannon
Adding to her numerous accolades, the “Diva Nikki Z” has added thespian to her resume with her role in Nick Cannon’s movie “King of the Dancehall”. Cannon directs and stars in this high-energy musical about a young man from Brooklyn who gets caught up in the vibrant Kingston music scene during a visit to Jamaica.

“I am so excited to be a part of this production… When DJ Buddha and Nick Cannon told me they wrote in a part for me, to say I was shocked would be the biggest understatement. But they saw something in my personality they felt movie worthy. Not only that they had me play myself, which made it even more special to me… My voice is heard throughout the movie before my visual part in the end. To Nick and his team I am forever grateful” – Nikki Z

Nick Cannon “King of the Dancehall” will premiere on September 8th, 2016 at the Toronto Film Festival.
SOURCE: MPR CONSULTING