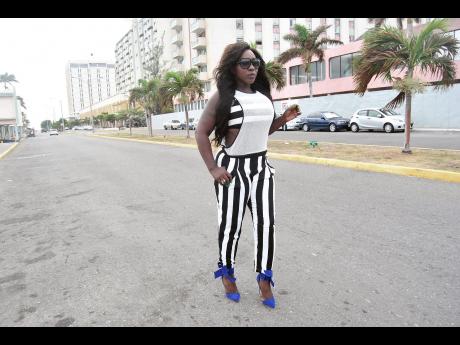 Spice is at the forefront of the dancehall scene. That’s across the board, irrespective of any gender division full stop. Recently, she held her own as the only female within the ranks of Mixpak sound system, which won the world’s biggest sound clash Red Bull Culture Clash at London’s O2 Arena.

Prior to that, the So Mi Like It hitmaker headlined the UK’s first trending dancehall concert, More Life 2016, which took place courtesy of Flames Radio, Another Level Promotions and Beemango.

As far as touring goes, Spice, real name Grace Hamilton, is always travelling and has cultivated a reputation for being one of dancehall’s most hard working artistes.

Born and raised in St Catherine, it seemed apparent that the singjay was destined for a successful career in entertainment.

Having initially left secondary school with a career in chartered accounting in mind, she opted for a different route and enrolled in the island’s prestigious Edna Manley College for the Visual and Performing Arts to study voice and drama.

Spice went on to gain the admiration and respect of the Jamaican public, after exploding on to the scene in the early noughties, and has gone from strength to strength. Over the last 16 years, she has managed to stay relevant, consistent, and dedicated.

Though the popular artiste has worked with male heavyweights such as rappers Busta Rhymes and A$AP Ferg, as well as dancehall don Vybz Kartel with whom she teamed up for the smash hit Ramping Shop Spice’s work with female dancehall artistes is notably infrequent.

“Mi nuh have no luck wit’ ‘oman,” Spice laughs of the observation. “Women are always bringing each other down so that they can be on top. It’s like a crab-in-a-barrel situation, but it doesn’t have to be that way. We can be all in it and winning together”.

With her raunchy onstage presentation, Spice is risquÈ to say the least. She has done it all for her audiences: Gyrating from tall scaffoldings; using interesting props like donkeys and bicycles; performing in inflatable bubbles; and often picking unwitting, typically sheepish men from the crowd to dance with.

Bursting into a fit of laughter when asked how she stays in shape for her high-energy concerts, Spice replies: “I eat a lot. My boyfriend always comments about how I am always ready to hit the stage, regardless of what I am doing beforehand whether it is arguing or whatever. I just really love what I do.”

Indeed, the artiste’s penchant for show-stopping performances has earned her the title of ‘Queen of Stage’, which she wears with pride.

“I’ve always tried to come with something different with crazy entrances that people can look out for.”

But despite her unchallenged respect within the dancehall arena in particular, Spice does not wish to be known as the new ‘Queen of Dancehall’ even after the former monarch, veteran artiste Lady Saw, stepped away from the scene last year.

“I am not here to be the new Queen of Dancehall,” Spice insists. “I just want to do good music, have achievements, get the Grammy, you know? Be myself. I don’t want to be called that.”

While her onstage persona is wild and seductive, Spice’s

offstage poise is sweet and graceful. Well-mannered, softly spoken, and very transparent, she offered a no-holds-barred perspective into her life as both an entertainer and a mother.

Many wonder how the mother of two balances raising a family she has a son, Nicholas Jr and a daughter, Nicholatoy with such a hectic career, which also includes managing multiple branches of her clothing boutique, Spicey Couture.

“I do not cope very well with being away from my kids,” she admits. “This is the only thing in my life that bothers me because I am on the road a lot.

“My daughter actually made me cry the other day. When I was leaving to come to the UK, she said ‘You’re always leaving,’ which made me emotional. I was thinking that I probably need to take a little break from doing these shows to make some more time for my children. They are my priority.”

With all of the pros and cons to being a music star, Spice has words of advice for anyone considering a career in dancehall.

“Don’t think that it is a bed of roses because there’s a whole heap ah problem inna it,” she says, before adding: Make sure that the talent is real.”