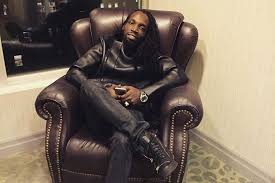 The Mavado and Popcaan beef is growing intense and now Vybz Kartel is being drawn into the feud.

Since the start of the summer both Mavado and Popcaan have been trading mild diss in songs and on social media but this is the most direct diss track we’ve heard yet. Foota Hype previewed the new Mavado diss track at his weekly party Galis Wednesday and judging from the crowds reaction you can tell it will be a banger.

“Go fi dem … Like da little pu*** deh weh try rise against the done inno / Well anything a anything the war start them fi know where them stand inno / Portmore say fi step past the father and go murder the son inno,” Mavado sings.

Foota Hype urged Popcaan’s producer Jamie who was in the venue to start craft a response immediately so this beef could be far from over.

Judging from the lines that we’ve already heard, Vybz Kartel could be forced to release a response.

It’s still unclear what sparked a beef between Mavado and Popcaan, but the Unruly Boss deejay sparked a lot of rumors when he released a new single “World Cup” which many feels is a direct response to the Gully Gad’s smash hit “Big League.”