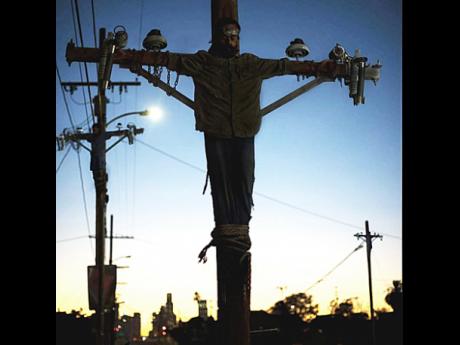 Damian Marley’s provocative latest single, Nail Pon Cross, sparked a social media firestorm recently when an image of the entertainer hanging from a cross surfaced on the Internet.

The image, which was being used to promote the track, did not go down well with the general public who, labelled Marley’s actions as being sacrilegious. More backlash could be on the horizon as the music video for the single was officially released yesterday.

The video premiered on global music-streaming service, TIDAL. The Welcome to Jamrock singer did not respond to social media comments attacking his character following the outburst, but seemed to put things into perspective surrounding the issue following the release of the music video.

In a statement sent to The Gleaner, the son of the legendary Bob Marley explained that the song as well as the music video were done to highlight how judgemental people can be.

His TIDAL associates believe that the video is timely, as it addresses important issues at a time of social and political discourse.

“TIDAL is exclusively releasing the provocative visual for Damian Marley’s latest single. In the video, Marley is seen tied to a cross, along with an African-American male, a Mexican immigrant, a Muslim man and a Los Angeles cop, representing the wrongful crucifixion of many,” said Shannon Atran of MWW PR.

“Coming at a time of social and political discourse, Marley is using this powerful visual to speak to all mankind – conveying a message of acceptance and urging people to raise awareness about the terrible effects of judgements made against people on a daily basis. With so many crucial and controversial issues affecting society, Marley hopes fans can unite and create a sense of hope for the future,” Atran added.

The song as well as the music video are available for exclusive viewing at TIDAL.com/Damian Marley. Marley is also a co-owner of TIDAL.

Nail Pon Cross is a single from Marley’s highly anticipated fourth studio album, Stony Hill. The project is scheduled to be released in October and would be the entertainer’s first album in over a decade. His last compilation, Welcome to Jamrock, was released in 2005. The album was certified Gold and won the 2006 Grammy for Best Reggae Album. The title track also won a Grammy that same year when he won the Best Urban/Alternative Performance category, a first for a Jamaican artiste.