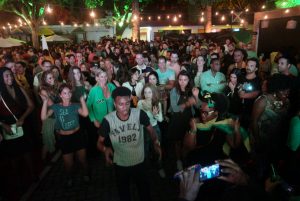 Now that the 2016 Olympics have ended and Jamaica House in Rio closed, at last Thursday’s post-event press conference Jason Hall, deputy director of tourism, said more than 20,000 persons visited the Jamaican base during its 11-day run. It had a budget of US$767,000.

The media and online response was also detailed in the analysis, presented at the Spanish Court Hotel, New Kingston.

In a presentation by Hall, impressions of Jamaica House and the athletes’ performance were impressive. Over the

A tally of social-media activity was also presented during the post-event press conference. Under the hashtag #ReggaeRocksRio, social media users in the United Kingdom generated approximately 8,400 total organic (unpaid views) social impressions, while in the United States the count was closer to 8.6 million.

A total of 25 media houses broadcast from Jamaica House, including NBC6 and E! News, which in a clip called Jamaica House one of the most important parts of the social scene in Rio’s Olympics atmosphere.

According to UK-based travel agency Travel Republic, searches for Jamaica spiked dramatically during the games, as bookings rose by 170 per cent.

Red Stripe was a big hit in Rio, according to Blandine JaiPaul-Reid, head of marketing and innovation. The brand was pressed to keep up with demand, causing patrons to get creative with their brand experience. Hall related witnessing some persons carrying away six-packs of empty Red Stripe bottles as souvenirs.

According to acting sponsorship manager of Digicel, Andrew Brown, the only thing missing from Jamaica House was two pot covers.

Minister of Tourism Edmund Bartlett said the success of Jamaica House can be attributed to Brazilians having the same attitude towards food and music as Jamaicans. He also suggested that Brazilians and Jamaicans have a similar celebratory spirit. Bartlett noted that if they did not have an athlete in a final, the Brazilians offered their energy and cheers to the Jamaican athletes.

In terms of spatial constraints, Hall said the Jamaica House venue was split in two. It was designed to have activities taking places in adjacent spaces – on one side was food and music and on the other a museum-style information hub. Brown described seeing persons who did not speak English filling the venue wall-to-wall.

Digicel ambassador and Downsound Records signee Nature was among the slated performers at Jamaica House. “It wasn’t a lengthy process,” Hall remarked when asked how the performers were chosen. Utilising the partnership of the Jamaica Tourist Board in staging Jamaica House, Hall said it was a matter of availability and cost.