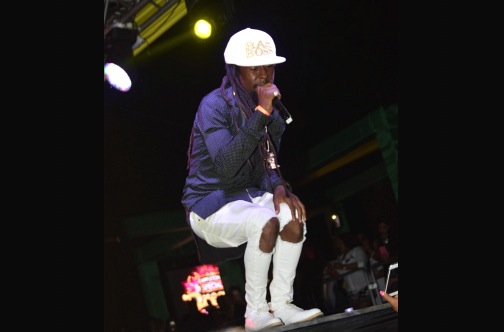 Reggae singer Jah Cure was a last-minute replacement for Elephant Man at Saturday’s staging of the rum-inclusive Wray and Nephew Yush held at Cayenne Beach in Negril.

The Jamaica Observer was informed that Elephant Man — who earlier last month in an interview promised an energetic set — missed his connecting flight to Jamaica.

Jah Cure was in ‘high spirits’ when he came on stage, as earlier in the evening he was seen enjoying the drink offerings and mingling with his fans backstage.

Although it was obvious that the jam-packed audience had anticipated Elephant Man’s performance, they quickly welcomed Jah Cure, who started his set with his hit single Reflection.

However, the remainder of Jah Cure’s set saw him only performing the intros to his songs and the fans doing the rest. His set included You’ll Never Find, Only You, and Call On Me.

“I have seen Jah Cure in performance several times, so I know this is not the best of him. But I understand as he obviously came to party and was asked to fill the slot, which he did. This set is unlike him, so myself and others will surely look beyond that. I really look forward to seeing him in concert again,” Texas resident Austin Clarke told Observer.

Before Jah Cure’s performance, the party saw selectors keeping the dance floor occupied with hits from the 80s and 90s, including Madonna’s Like A Virgin and Whitney Houston’s How Will I Know. However, dancehall music ruled with ‘blast from the past’ from artistes including Cham, Lady Saw, Beenie Man, and Vybz Kartel.