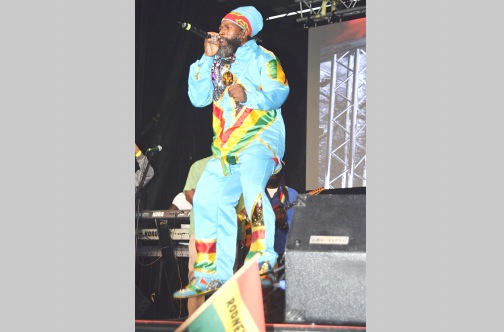 Although several artistes including Beenie Man, Aidonia and Bounty Killer were no-shows, St Mary Mi Come From made a scorching comeback after a three-year hiatus. Held at Gray’s Inn Sports Complex at Annotto Bay in St Mary, promoter Capleton and fellow artistes such as Chronixx, Jah Cure, and Romain Virgo delivered outstanding sets and left the packed venue wanting more.

Backed by his Zinc Fence Redemption Band, reggae singer Chronixx was nothing short of educating and entertaining. Entering the stage close to midnight, he started his set with a few lines from Alpha and Omega. Minutes later he warmed up the auditorium with

Start A Fyah. This was followed by other hits from his lengthy catalogue including Ain’t No Giving In, and Thanks and Praise. His fans obviously enjoyed each song and this was evident by the flashing of lighters, waves and dancing. The singer then diverted his attention to the women and thrilled them with Smile Jamaica and Access. Proving he was not only talented in the recording studios but on stage, Chronixx threw in energetic performances with tracks including Behind Curtain, Spirulina and Capture Land.

Rastafarian singer Jah Cure continued on the path of being a crowd pleaser. His approximately 20-minute performance saw him belting out hits including Sticky, Same Way, Run Come Love Me, Reflection, Longing For, You’ll Never Find and Call On Me.

Romain Virgo seemed to mature musically with each performance, and Friday night was no different. He thrilled his audience with

I Wanna Go Home, Taking You Home, Love Doctor, and I Am Rich in Love.

Virgo set a romantic mood for the females, several of whom clutched their partners, when he belted the lyrics to Way Too Beautiful, and a cover version of Sam Smith’s StayWith Me.

He also dug into cultural tunes like Letting Go, Live Mi Life and Who Feels It Knows It.

Before Romain’s performance, veterans Barrington Levy, Cocoa Tea and Half Pint delivered a spectacular three-the-hard-way set. This was followed with sets from Nadine Sutherland and Terror Fabulous, Jigsy King, Wickerman, and Ninja Kid.

St Mary Mi Come From boasts one of the most stellar line-ups to date, and as a result, the organisers should consider transforming the event into a two- or three-day festival. This would give each act ample time to please their fans, instead of the rushed sets seen with some of the artistes on Friday. Although the band changes were quick, there were complaints about the frequency.

“This is a vibe breaker and there aren’t much entertainment in between sets,” a patron was overheard saying.

Launched in 2000 by St Mary native Capleton, several institutions (hospitals, schools, infirmaries) in the parish have benefited from the show’s proceeds.