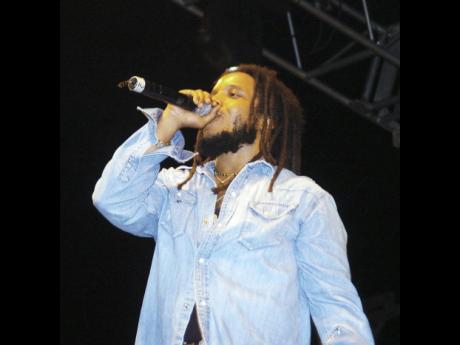 “The plan this time was to cross-pollinate other genres with reggae music, in order to produce a colourful album. So there’s a little jazz, a little hip hop, a little dance – it’s like a fruit basket. You know, you can have grapes today, you can have an orange tomorrow, you can have a mango on Sunday – and so on!”

The concept sounds great. But at a time when there has been much debate about the cultural appropriation of reggae/dancehall – with artistes like Canadian rapper Drake and pop prince Justin Bieber being criticised for hijacking the genres – does Marley fear he may be slammed for the ‘cross-pollination’ of styles on his album?

“Well, you’ll always have critics,” the 44-year-old says, before singing his father’s famous lyrics: “‘They’ve got so much things to say’ – that’s what my father said. Critics will always have something to say.

MUSIC IS FOR EVERYONE

Of the artistes who have been criticised for jumping on the reggae bandwagon, Stephen says: “I can’t judge people like that. The music is for everyone and it is meant to influence or inspire people. People being influenced by reggae or trying to emulate the music is a great compliment.

As the son of the late, great Bob Marley, there’s no question that Stephen, and indeed all his siblings, are rooted in reggae. But, of course, it wasn’t just his famous father who provided the source of his musical inspiration.

Ask the producer, multiinstrumentalist and Grammy Award-winner which artiste’s music uplifts and inspires him, and he says without hesitation: “My mother’s music. She’s been like a mother and a father since my father’s physical presence was no longer there and her music is inspiring.”

But, of course, Stephen also looked up to his father – not just musically, but in terms of his sense of style.

Just a few months back, Jamaican author Marlon James wrote an article for GQ magazine, in which he hailed Marley as an “underrated style god”. Does Stephen remember his father, who died in 1981, as a fashionable man?

“Yeah, man – he had his wardrobe,” Stephen laughs. “My father and a lot of that generation were influenced by American music. So they were in their suits and making poses like The Temptations and acts like that! So yeah, he was in tune with what he liked.

“But to me, … me did see him like a cowboy – in him jeans and him boots! He was like a rebel cowboy. As a child, that’s how I saw him – like a black cowboy.”

An artiste in his own right, 25-year-old Jo has released songs, including Rock and Swing and Sunshine. He also features on his father’s new album, on the track Revelation Party.

“But at the same time, I didn’t point him in this direction. As a matter of fact, I didn’t even encourage him [to get into music], nor did I give him an opinion, because I didn’t want him to feel like he had to do music. But once I saw him really getting into it and making those steps, that’s when I said, ‘Alright yout’, it look like ah dis you really come fi do’!”

“Yeah, man, it’s a wonderful thing,” Stephen laughs. “Joseph has a little daughter now and the evolution of life is a wonderful thing. I’m grateful to be here to see my children’s children. That’s a blessing.”

Source: Fruits of his labour – Reggae star Stephen Marley on his father’s ‘cowboy’ fashion sense, working with his son, and why his new album is like a fruit basket | Entertainment | Jamaica Gleaner