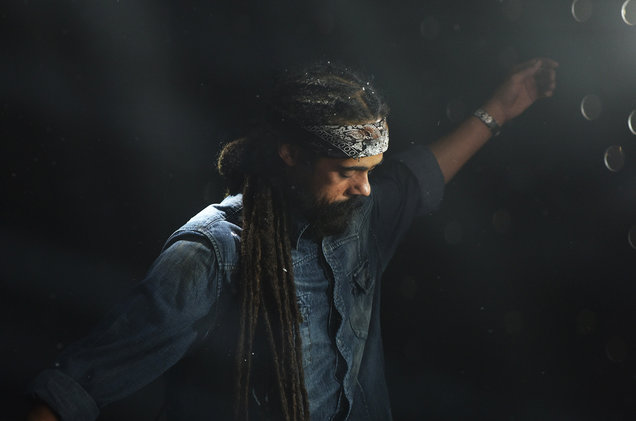 Eleven years ago, Damian Marley released Welcome to Jamrock, the Gold-certified winner of the 2006 Best Reggae Album Grammy, with its powerfully gritty title track winning the Best Urban/Alternative performance Grammy, a first for a Jamaican artist. Since then, Damian’s busy schedule has included recording the SuperHeavy album as a member of a short lived supergroup that included Mick Jagger and Joss Stone and working with Nas on the critically lauded Distant Relatives.

Now, the reggae scion is prepping Welcome to Jamrock’s much-anticipated follow up, his largely self-produced fourth studio album, Stony Hill, which is scheduled for an Oct. 28 release. Stony Hill’s first single, the urgent “Nail Pon Cross,” debuts today on Billboard and is streaming exclusively on Tidal, where Damian is one of several artists/co-owners.

Sampling the blistering, bass heavy rhythm from Jamaican vocal trio Black Uhuru’s 1984 hit “Solidarity” (produced by the legendary reggae drum and bass virtuosos Sly Dunbar and Robbie Shakespeare) Marley’s succession of ingenious rapid-fire rhymes, delivered in his inimitable sing-jay style, caution against rash assessments of people irrespective of their background, color or social standing. “I wasn’t thinking about anything grandiose when I was writing the lyrics, just day to day personal relationships,” Marley told Billboard in an exclusive interview. “The song touches on the judgments we see in the media and in politics, but it is really about how we pass judgment on each other.”

“You must understand that a man is just a man/ Don’t you judge him for his ways and flaws/ Speak of love tomorrow you’ll be doing good my brother/ You’re working for the greatest cause,” Marley sings on the track that serves as a lesson on casting the first stone, a relevant message in this strife-filled presidential election season.

The video for Nail Pon Cross (Jamaican patois for “nailed on the cross”) directed by Darren Craig, was filmed in Los Angeles in mid-July and is scheduled for a debut on Tidal on Aug. 9. It evokes a preeminent example of heartless condemnation—the crucifixion of Jesus Christ. In its climactic scene Damian, dressed in a long sleeve shirt, jeans, a bandana around his forehead replacing a crown of thorns, is nailed to a cross alongside a young African-American male, a Mexican immigrant, a Muslim man and a Los Angeles cop. “At one point in time centuries ago, crucifixion was a widely used form of capital punishment,” Damian emphasized (several media houses report this barbaric act is still practiced in Saudi Arabia and Yemen). “So we are not reenacting the crucifixion of Christ but showing the crucifixion of many. Whether people like it or not, the most important thing is to raise conversations about the judgments made against people.”

The act of crucifixion has underscored various messages in popular music from John Lennon’s reference to his metaphorical crucifixion in the 1969 “The Ballad of John and Yoko” to Kanye West wearing a crown of thorns on a 2006 Rolling Stone cover to Madonna hanging on an oversized mirrored cross during performances of “Live to Tell,” engendering interfaith criticisms, as part of her 2006 Confessions tour.

For the Nail Pon Cross video Marley found inspiration in Nas’s forceful 1999 Hype Williams-directed video for “Hate Me Now.” “The imagery in Nas’s video was made to look like a modern depiction of Christ’s crucifixion, that’s where I got the idea for the Nail Pon Cross video,” said Damian. “I haven’t seen Kanye’s Rolling Stone cover and Madonna’s energy and message is a whole lot different than mine; they thrive on controversy and I am not doing this to be controversial, this is to represent the judgments that people make so if someone has a problem with the video, that is exactly what the song is talking about.”