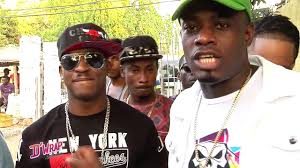 With a hit song under his belt, deejay/dancer Ding Dong has much to celebrate these days.

Referring to the title of his hit song with deejay Dexta Daps, Ding Dong said he is basking in the Coolest Summer of his career.

“We have performed in the Caribbean and the United States, Reggae Sumfest and Dream Weekend. It has been blessings galore,” he said.

“We” are Ravers Clavers, the dance group Ding Dong started in Nannyville, East Kingston, in 2006.

Recorded on the Success ‘riddim’ for Good Good Productions, Coolest Summer was arguably the biggest song of the season. The group’s Gas and Wul Up dance are also popular in clubs and parties.Ravers Clavers rose to prominence in 2008 when star sprinter, Usain Bolt celebrated his three victories at the Beijing Olympics by performing their Nuh Linga dance.

Their leader explained the secret to their success.

“It is the energy and vibe that we bring to the event. It is all about our work ethic and the fun that we bring to each performance. We incorporate our audience and just bring out the life in people,” he said.

Ding Dong, whose given name is Kemar Ottey, has made the summer scene before. In 2009, he had a massive hit with Holiday.

But he is best known as leader of the dynamic ‘Ravers’ whom he credits for keeping dancing at the forefront of dancehall.

“Athough there is still room for improvement and there is still a long way to go in the dancing arena, late godfather of dancing Gerald ‘Bogle’ Levy must be looking down and smiling. The dance movement is alive and well,” said Ding Dong.