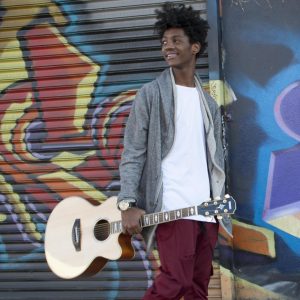 You can recalled Bounty Killer bringing out the 19-year-old on stage during his set at last month’s Reggae Sumfest in Montego Bay. Myjah says the feedback from the massive crowd on Dancehall Night was a heartfelt. The singer/songwriter/producer sat down with Winford Williams of OnStage last week where he opened up about his musical career and working with one of the biggest names in R&B right now, Chris Brown.

“Basically I was writing in a couple rooms and my guys ask me if I want to start working on Chris Brown’s project,” he said. “So I wrote a bunch of songs we were in the studio for about a week just working. One of my guys 2 Guns went out to L.A. and played the records for Chris and he loved them. So I just heard that I got the title track and two more songs on the album.”

Myjah also says that he is not trying to celebrate the success too soon but still sees it as a great achievement.

“It’s never done until it’s done but I think it’s a dope achievement it’s a great place to be,” he added.

Chris Brown has been rumored to be working on his new album tentatively titled “Heratbreak on a Full Moon” due sometime this fall. But so far this has been the best hint that the album is a reality.

Side note, Major Myjah also just revealed that he is one of Bounty Killer’s 10 kids. Who knew that Grungadzilla had so many kids. Still a far cry from Elephant Man and Ninja Man but still plenty kids.