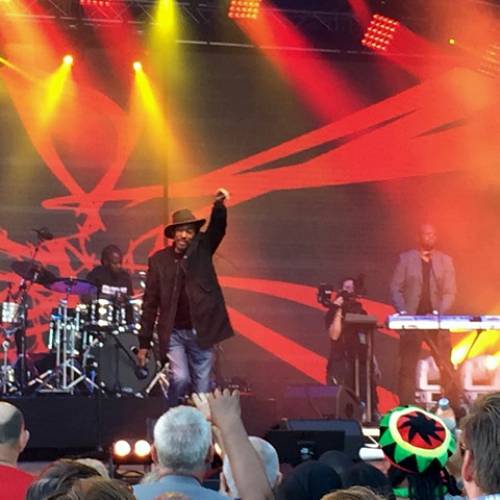 With a career spanning over four decades, Britain’s much loved reggae band Aswad has produced over 21 albums and enjoyed chart successes with catchy hits including Don’t Turn Around and Shine.

Both Tony and Brinsley went to school in Neasden, while Drummie Zeb was from Ladbroke Grove and attended Holland Park School. Brinsley left the group in 1996 for personal reasons but Tony and Drummie have kept the Aswad magic alive.

Aswad have a unique British take on reggae, having been the only UK group to record or perform with several top Jamaican artists including Burning Spear, Bob Marley, Peter Tosh and Bunny Wailer.

Indeed their inspiration was from the late great Bob Marley – a legend they are proud to have worked alongside.

Speaking backstage after performing at the Chilfest in Tring, Hertfordshire on Friday, Tony ‘Gad’ Robinson said: “We’ve met lots of people including Bob Marley. Bob Marley was the reason we started in the first place. When we started out, we said that’s the kind of music we want to play. If he can do it, we can. That was our inspiration.

“I did get a chance one day of driving Bob Marley. I was quite young at the time, and was very star-struck, and I drove him and his friends around town for half a day. If I said Boo, that was a whole heap, because it was Bob Marley!

“When we did a gig in Holland, Bob Marley was there, and we had to borrow a guitar from him because one of ours wasn’t working, and he came to the gig. Some people called me over, and said, “don’t you want to take a picture with Bob Marley?” and I was like, “Oh no!” Up to this day, I think why did I say no?!”

The group first came to the public’s attention in 1976 when their debut release Back to Africa hit the number one slot in the UK reggae charts. This was followed by Love Fire a popular hit which became part of the reggae canon and is still covered today by Jamaican record producers – a rare honour for a British band.

After a series of successful singles and albums on Island and CBS, Aswad achieved international acclaim with their reggae version of Don’t Turn Around, which topped the charts at number one, an accomplishment the band is very proud of.

Tony said: “It’s something you don’t really take in until afterwards. It was 1988 and we had already been a band on the road for years before that. We had already done all the roadwork. It wasn’t as if we were a new band who had put out our first song and it went to number one, which happens to a lot of bands these days.

“We learnt our art on the roads first. By the time we got to number one, we were ready for it. We felt we deserved it as well because we had been plugging away for years. The first thing you want to do is put a song out that goes to number one. I’m glad to say we have. That’s the first accolade – the next is playing to people.”

Outlining the band’s current projects, Tony said: “At the moment we are on the road and we are also in the middle of recording. We hope to get some new music out, if not this year then next year.”

“About eight years ago, we put out a single and went to do an interview and the woman asked me about the single and I said I know what it sounds like, but I don’t know what the cover looks like, all I know is that it’s out there somewhere! You press a button and it comes out of whatever machine you have it in. It used to be about going to the record shop, reading the sleeve, but nowadays I don’t know where to look.”

Recalling the nostalgic days of vinyl records (which are now making a comeback), band mate Drummie said: “I remember being with a kid and saying about our new LP, and he said what’s an LP?!”

Talking about his friend’s reaction to Aswad’s stardom, Drummie said: “Being the first black reggae band as Rastas was something else – we’d been on the road for years before we were on TV. It only hit me when my mate saw me, and he said “you know what, I saw you on TV!” The world was our oyster!”

Asked to choose a favourite song from the 80s, but not their own, Gad said, Prince’s The Most Beautiful Girl in the World.

Aswad are currently touring and will next be appearing at the One Love Festival 2016 in Sabbiadoro, Italy which runs from July 20th to 24th. They are also appearing in Central Park, Dagenham on 27th August, The Jazz Café, London on Saturday 1st October and the STAGE, Basingstoke on 14th October.