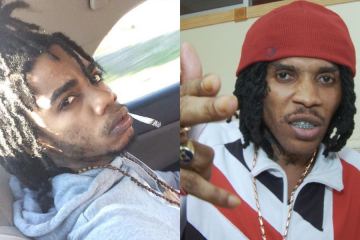 Alkaline is making it clear to Vybz Kartel that he is the man of the moment in Dancehall.
Alkaline is reportedly taking lyrical shots at Vybz Kartel.

With his eccentric style, lyrical versatility and charts recognition, many may agree with Alkaline that he is the modern Dancehall King.

Alkaline, who released his debut album ‘New Level Unlocked’ on March 25th, is making it clear that he is the man of the moment in Dancehall.

The “Champion Boy” deejay recently premiered a new single, “Lose,” where Alkaline sings about his status in the genre and also takes a few jabs at incarcerated deejay Vybz Kartel.

“Alkaline a run dancehall all a we know a the truth this / How teacha fi run dancehall being incarcerated / Yo no affi bother chat mi know a one serious line / Yo know more time yo affi just get up and just speak your mind,” Alkaline states in the song.

This is not the first time that Alkaline is reportedly taking shots at Vybz Kartel in a song. He allegedly took mild jabs at the “Worl Boss” deejay and his protege Popcaan on his smash hit “City,” released in March.

The “All About The Money” deejay also touched on the topic of getting a foreign visa denied and breaking up with his girlfriend who is living in Florida.

Alkaline, who emerged on the scene in 2013, quickly climbed the international scene as he emerged shattering the dancehall ‘norm’. His melodic play on words caused lovers of dancehall and hip hop to gravitate to his music.

With his rock star image, long hair and eclectic musical ability, Alkaline definitely made a name for himself in the past three years.

Known for bending the rules and taking chances, Alkaline is definitely a trendsetter in his own right.