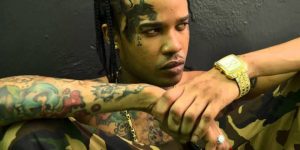 Tommy Lee Sparta is fighting back claims made by the police department that he is wanted in connection to a recent shooting incident in Kingston. The dancehall deejay was named as a person of interest last week resulting in some bookings being cancelled. Tommy Lee and his attorney, Earnest Smith, reported to the Elletson Road Police Station on Monday. Tommy Lee Sparta Says He Did Not Pull The Trigger In Shooting Incident The artist was questioned and later released without being charged. Smith claimed that the incident that cops questioned him about was not related to the same incident he was named as a person of interest for. “They were saying he is alleged to have been present in an area where shots were alleged to have been discharged,” Smith said. “Not that he fired any shots, not that he was in the company of the person who fired any shots or in the possession of any firearms, but that he was in the vicinity of some ‘mother’ who bathe people.” Tommy Lee Sparta and his attorney also say that they are looking into filing a lawsuit against the government for their blatant attack on the dancehall deejay’s reputation.