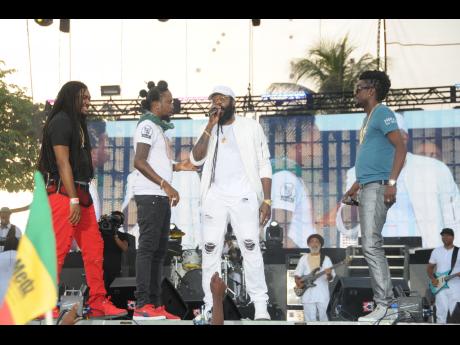 Following his memorable appearance at Sumfest 2016, Tarrus Riley is confessing that he had a good time performing for an appreciative audience at the world-famous reggae festival that concluded in Montego Bay over the weekend.

During his set, he paid tribute to some of reggae’s great performers and freestyled with Beenie Man and Popcaan, and also had the audience singing along and having a blast. “I went there to have a good time, and for the people to have a good time and that is what happened,” Riley told THE WEEKEND STAR. “It was a really good experience.”

Explaining that he wanted to do something different for fans during his set, Riley paid tribute to John Holt, Gregory Isaacs, Garnet Silk, and his late father Jimmy Riley. Each of these legendary performers has had a distinct impact on his life.

“John Holt was a good friend of my dad. I saw him around my house a lot [when I was] growing up,” Riley said. “Garnet Silk is my favorite singer. Gregory Isaacs inspired me, motivated, me and they highlighted what was the best in our music.”

The two songs by his dad that he performed – Love and Devotion and Rougher Yet – were among the more popular songs done by the elder Riley, who passed away earlier this year. The latter, he revealed, does have special meaning. “When things get rough you have to get stronger, stronger than strong because it’s going to get rougher yet,” he said.

The freestyling session with Beenie Man and Popcaan, he said, actually started back in the dressing room as they were having fun partying while listening to veteran Super Cat perform. It spilled over on to the stage. Riley also called up Iba Mahr and Zagga during his performance