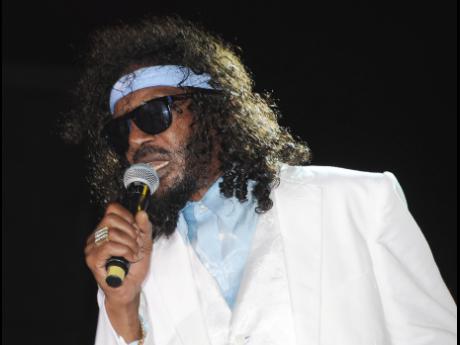 If you grew up in the 1980s and was a fan of sound system music, Super Cat’s dazzling performance on Saturday night’s Reggae Night segment of Reggae Sumfest 2016 must have evoked great memories of the champion deejay at his best.

In a performance reminiscent of his youthful days, sparing alongside the likes of the late Early B on Killamanjaro sound system, Cat was lyrically brilliant as he sat on the various ‘riddims’ like the proverbial ‘tyre on a rim,’ driving the dancehall faithful crazy, especially with his ‘rude boy’ lyrics. Despite being clad in full white, Cat looked every bit the ‘wild apache’ in his trademark dark glasses, the unkempt hair flowing down the side of his head and across his face, the single gold tooth glistening under the spotlight and his ‘rude boy’ swag.

With the backing band strumming several of his song in an instrumental medley, the deejay signalled that he was ready to work when he strolled across the stage proclaiming, “Ah ah ah … me a warn dem and tell dem from eighteen how long … ah ah ah … warn dem.”

With screams of delight erupting in the crowd, the deejay went straight into the heart of his lyrics bag, unleashing the potent vocals of Watch Out Mek Me Come Down, in which he explained lyrically that the ‘Rappa Dappa’ (one of his many stage names) had come ‘fe mash it up”. With Catherine Hall sounding more like a dancehall in full-flight and many of the fans dancing up a storm, the veteran deejay all but became one with the backing band, milking the various ‘riddims’ to the fullest,’ causing many delighted fans to raise their ‘gun fingers’ in the air, ‘bussing’ imaginary blanks.

There was much skanking as the deejay continued his lyrical assault with songs like Jamaica, Jamaica, It’s All Because Of You, Tight It Affi Tight, Vineyard Style and Big Aready in one awesome block of rich dancehall magic.The excitement reached fever pitch when the band delved into the ever-popular Mud Up Rhythm, which seemingly fired extra energy intro the deejay’s legs as he danced around the stage, belting out songs like Dem Nuh Worry We, Under Pressure and Don Dada, with crisp vocal qualities.