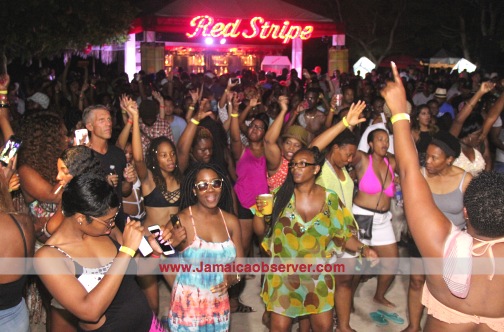 IT was a full house that turned out for Reggae Sumfest’s Beach Party at Aqua Sol Theme Park in Montego Bay, St James, on Sunday night.

The party was the event opener for the 24-year-old festival slated to run until July 23 at Catherine Hall.

Robert Russell, deputy chairman of Summerfest Promotions — organisers of Reggae Sumfest, said the beach party was one of the best he has seen.

“The turnout was good and the party vibes was excellent. Everybody had a good time,” Russell told The Jamaica Observer.

“The response has been overwhelming. We had a lot of overseas patrons who indicated they would be coming to the All-White Party at Pier One,” he continued.

Sumfest activities continue tonight with the All-White Party at Pier One; Thursday’s Sound System Explosion; Dancehall Night on Friday; and culminates with Reggae Night on Saturday.