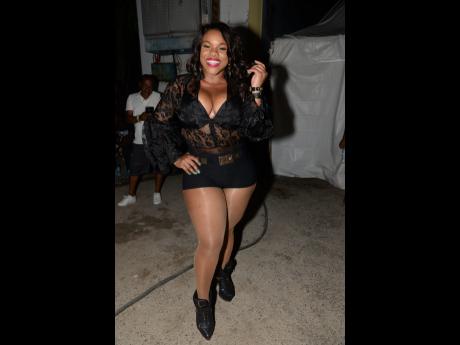 Media personality Miss Kitty has come in for high praise from organisers of Reggae Sumfest for the stellar work she did at this year’s staging in Montego Bay last weekend.

The effervescent radio talk show host and emcee was at her best during the festival, hosting the beach party at Aquasol Water Park, Dancehall Night, the press conference at Iberostar Hotel, and the Digicel stage on Reggae Night.

“She continues to grow, and I would say she is the quintessential hostess-performer-personality in the business,” said Joseph Bogdanovich, CEO and chairman for Downsound Entertainment.

“I think she contributes very good energy and good information and knows how to drive an audience like no other. I think the sky is the limit for her.”

Glamorously dressed, she stepped on to the Sumfest stage to screams and shouts from adoring fans. In no time, she showed her comedic side.

And prior to her introduction of dancehall star Spice, her team helped to ‘pull down’ her outfit and take off her shoes, demonstrating to her appreciative audience and to the world that she is indeed an act in her own right.

This was certainly appreciated by Robert Russell, one of the organizers of the show.

“I think Miss Kitty did a fantastic performance on Sumfest and surprised even me because I know she is talented, but I never knew she could go to that level of expertise,” he said. “Even the press conference that she hosted, she was so amazing. I think we are going to have to make her a headline act for next year.”