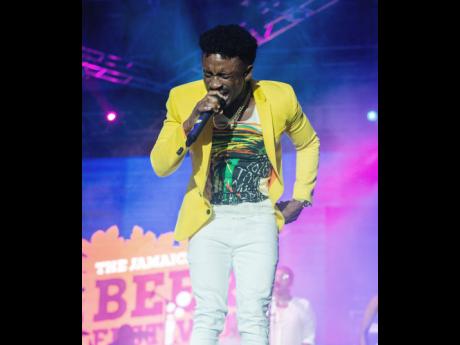 He debuted at Reggae Sumfest in 2007. The burning desire to please his fans had reached fever pitch, especially because a life-long dream of performing at ‘The Greatest Reggae Show on Earth’ had come true.

Nearly a decade later, Christopher Martin reveals that he is no less upbeat about performing at the reggae festival to be held in Montego Bay, St James.

“Every year I try to make an impact, and the way I treat Sumfest is that when I go on that stage, I treat it like it is that first time performing on that stage,” Martin told THE STAR.

“My mother always told me that anything I’m doing for the first time, I must always aim to make a lasting impression.”

Those words of advice have defined the way Martin approaches his job as an entertainer. When he performs on Reggae Night, the Big Deal singer said patrons are going to get “more than a 100 per cent energy”.

The Take My Wings singer, who hails from Back Pastures in St Catherine, said he is serious about captivating the hearts and minds of music lovers at this renewal of the festival.

“We leave it all on the stage, so when Sumfest finish they can say Christopher Martin gave us a great show. Yea, man. We nuh leave nothing to chance, man. We have fans that come to see us and as well as mutual fans coming to watch the show, and after they leave that show they are going to leave with a lasting impression”.

“Sumfest is one of these shows in Jamaica that an artiste, whether singer or DJ, really aspires to perform on that stage,” Martin said.

“The big stage at Sumfest is that event that is recognised all over the world for a mixture of reggae and dancehall. Is just like you’re in Europe and you have the Rotterdam or Summerjam, Reggae Sumfest is like that for Jamaica.”

“Europe was great, man, Europe was great, awesome, awesome vibe, I even carried my band. You understand, I don’t even know how to explain it. I feel like I have the greatest fans in the world because every show is full of energy and full of vibe because if you put your hands up everybody put their hands up, and if I you move to the left they move to the left. They are very cooperative, very live, you know, the love is reciprocated, you know. I give them good music, they give me good vibe, so I think I have the greatest fans in the world and that was showcased in Europe,” he added.

And it is that good vibe that Martin aims to tap into once more when he takes the stage at Sumfest this year.

Comparing his first year at Sumfest to subsequent years, Martin said: “Every year is a different feeling and because every year, leading up to July, and from you leave the stage, you know its next year again. It is like you learn so much thing and you get different song added to your catalogue. You know is a whole different package for the person every year, so the excitement for me never dies. Everytime I get that chance to perform, I try to make a major impact. Yea, man. I’m always geared up for Sumfest, that is the calendar event for reggae and dancehall music for Jamaica. There is no two way about it,” Martin said.