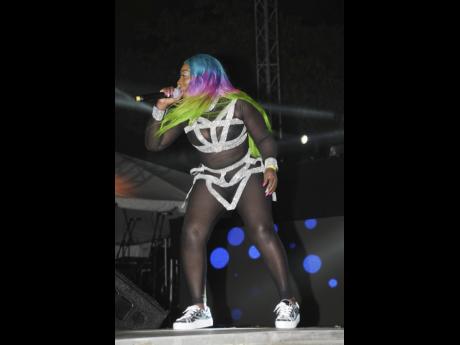 The photographer who ended up in hospital with a broken leg after attempting to lift dancehall artiste Spice at a show in Connecticut, United States, back in April, will get his rematch as requested.

The man, known in the entertainment fraternity as Kerry, is slated to return to Connecticut for a show where Spice is listed as one of the main acts.

Promoters of the show, to be held on August 7, told THE WEEKEND STAR that the photographer is ready to make up for his failed attempt at dancing with the ‘stage show boss’ and is excited about the rematch. “He has been waiting for this opportunity since that incident and is really excited to finally get his rematch,” said Tikka of Swamp Productions.

The promoters have also said that Spice is excited to be encountering the photographer again. “She is really excited about it. You know Spice never disappoints when it comes to performance, so expect a great show,” Tikka said.

The show, Summer Fest, is slated to be held at the Sportsman Athletic Club in Hartford, Connecticut. In addition to Spice, I-Octane will also feature as one of the night’s main acts.

Back in April when the video of the ill-fated incident went viral, there were many social media comments directed at Spice and her weight. People blamed the entertainer for the photographer’s demise, stating that she was simply too ‘fat’ for him to lift. In a follow-up article, the artiste responded to those critics by letting them know how comfortable she is in her own skin.

“I’m extremely comfortable in my own skin. Those exact same persons who are fat-shaming me will be the same ones who will have much to say if I get extremely slim, so I normally don’t get fazed by criticism. Trust me! I’m in love with my weight,” Spice had said.